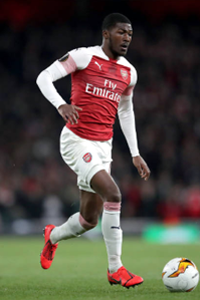 That's the part of his game that really stands out, for a young guy he's exceptionally calm and composed on the ball. He looks incredibly assured but he also gives off the impression of being too calm on the ball - this season in particular I've noticed that he has a tendency to play too lackadaisically, and this can cause his short passing to be wayward/lacking adequate weight.

No concrete suggestions yet, but I'll say he's had a game or two this season where his passing has looked suspect. Though I know for certainty that he can play the level of passes that these stats currently suggest, if not better. Might just be nerves/lack of consistent playing time that's causing him to fuck up sometimes.

Would also suggest keeping an eye on tw, as 75 is pretty good for a defensive player as young/inexperienced as him, and I get the feeling in defensive situations that he thrives more in 1 v 1s as opposed to co-ordinated defences maneuvres where he's required to help maintain the shape of the d-line.
Top

I've only seen this player twice, and in both games he was terrible in defense. I don't know if he's always that bad, but those 2 games I got a very bad impression from him in defensive terms. I'm not an EPL expert...
The intelligent people are full of doubts while the stupid ones are full of confidence.
Top I'm not really feeling the current defence value, we currently have one of the most chaotic defences in the top European leagues and this is only exacerbated when we have Maitland-Niles filling in at right back. In all honesty I'm not certain of how to gauge defence if someone like Granit Xhaka sits in the mid 60s, but I know that Maitland-Niles appears very shaky when it comes to defending, really all he's got going for him in such scenarios is his physical prowess. He's decently quick but he's very stand offish as a defender and often suffers lapses in concentration. In my mind he's not higher than low 60s at most, though I'd consider going even lower.

Response looks high at first glance. Agility too, he's decent in terms of his range of movement but 83 is a very good value, no? In my mind a player with this high an agility value - to the point where it's one of the more prominent aspects of his game - would make use of such agility more than Maitland-Niles does. He doesn't come across as a player whose agility is a key aspect of his game. I personally wouldn't go over high greens.

A number of users have noted his composure on the ball, but for me that isn't enough to warrant an 82 in dribble accuracy. His footwork is decent to good, no where near the realm of yellows, which in the case of this particular set would denote a player who's very good with the ball at his feet. Maitland-Niles is casual in possession bordering on careless, and I feel that this may affect peoples perceptions of him as a player. He may come across as assured, but Arsenal fans know that his execution doesn't necessarily always match his perceived confidence on the ball. High greens at the most in my opinion, if that. He might even be more of a dribble speed > accuracy player, but this may also have to do with the fact that he's been marooned at fullback where he's more able to exploit open spaces with his speed.

I would have him on whites for all passing stats, he's the definition of a lackadaisical passer and it is not uncommon to see his passes wanting in terms of weight and accuracy.

Aggression could come up, he's quite an advanced player regardless of whether he plays at fullback or in midfield. Should be low yellows minimum.

I feel like teamwork and mentality are both overblown, I would say these are two areas where his game is quite lacking. Especially from a defensive standpoint, he is not someone I would consider a competent defender.
Top

As a number of users have noted 66 def is too high. Some other values can do with update as well. Free glenn holder suggestions look good.
Top

stumink wrote:As a number of users have noted 66 def is too high. Some other values can do with update as well. Free glenn holder suggestions look good.

Agreed, he has a very good analysis of the player that better reflects him
Top

His bal's better than this, he's no slouch when it comes to going shoulder to shoulder even if he isn't a dominant player. Should be high greens/low yellows at minimum. His stamina's better than this too, imo it's probably one of the better areas of his game, he's been marooned wide of the defence on many occasions now, and while he's clearly not a natural defender, his engine does help him get up and down the pitch when he's played as a fullback. Would've thought he's somewhere along the lines of 84 minimum?

Don't think he's shown anything consistently to deserve 78 res yet? Or at least it's not a stand out area of his game in my mind, when these stats seem to suggest it is.

I echo what others have said about da, like yeah he looks composed on the ball but he's shown nothing that leads me to believe he's already this good? I'm personally not even sure he's a da > ds player.