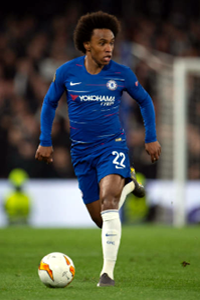 imo Wilian is a bit outdated so here are my stats for him:

Attack: 74 imo a fair value as he is able to get into a right position for a shot, but not more
Defence: 40 a bit weaker as he didn't show any real tackles
Balance: 73 is enough for him because he isn't a strong guy he can be easily outmuscled
Stamina: 80
Top Speed: 86 his biggest asset is his speed and imo he should have the same TS/Acc like Robinho
Acceleration: 86
Response: 82 he was underrated here he's quite able to intercept passes and a good thinker
Agility: 85 another great strength he's fast like a lightning he can turn his body imense quick
Dribble Accuracy: 82 seems fair as he is able to hold the ball quite good under control but he mainly uses his speed in his dribblings
Dribble Speed: 85
Short Pass Accuracy: 76 he's able to perform quite easy passes
Short Pass Speed: 73
Long Pass Accuracy: 74
Long Pass Speed: 74
Shot Accuracy: 72
Shot Power: 80
Shot Technique: 73
Free Kick Accuracy: 74
Curving: 77
Header: 66 rarely use his head and he's rather trying to bring the ball down than to take a direct header
Jump: 74
Technique: 84 he has the ability to do quite difficult tricks and they always looks very smooth and well timed
Aggression: 80 he's trying to join almost every shakthar's attack
Mentality: 72 isn't really fighting especially if his team is loosing you won't see much of him
Goal Keeper Skill: 50
Team Work Ability: 76 quite a fair value, i've to mention the excellent brazilian team working with fernandinho, ilsinho and luiz
Injury Tolerance: B
Weak Foot Accuracy:5
Weak Foot Frequency: 5
Condition: 6
Consistency: 5 is someone willing to agree?

He's much more agile than this, he's bordering on a god value imo.
Top

this is how i see him.

I completely agree with tamaguchi_japa.
The main post is outdated.
So please change the main post.
Thank you/
Top

if theres no one objecting I'll update
I'm against you
Top

They seem quite accurate although I'm unsure of his SA and ST. I'm not sure if he's really that good.
Top

Holy crap. tama, are you sure he deserves that much agility? I mean, I know he's agile, but 93? And don't you think you overrated his passing stats a little bit? I used to like his football style a lot while he was still on Corinthians. I mean, do you watch him a lot? 'Cause I remember he could really smack the ball a little bit harder than your shot power suggestion of 81...
Top

What about the suggested update ? I thinks it is fair (except for agility, where I would suggest 87-88).

And I also agree with the trickster card.
Top

well, maybe 93 is too much (imo not), but he min i can agree is 91, same as Valbuena or Foggia *(they are smaller than willian), but imo he is more agile than then, so for me 92, same as theo walcott, who has almost same Height/Weight.
Top

So, is anyone against updating the first post with tamaguchi's stats (with a 92 in Agility)?

think he should have an update in TS, ACC, DA, DS and TECH cause arehis main weapons
Top

wrote:think he should have an update in TS, ACC, DA, DS and TECH cause arehis main weapons

Why the hell you always want to update aLl the players who are lInked to FC BArcelona for the next season? ARen't you supoused to be 'madridista'?