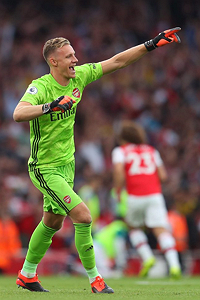 Better Response than ter Stegen? Doesnt seem right. He was good in his first games, but I dont think he`s better than Marc. But maybe ter Stegen needs an Update...
Top

s-cobar wrote:But I don`t discuss much about my GK sets, cause it`s my passion.

So you have a lot to do with all these promising young german GK. But you`re doing great.

s-cobar wrote:The ter Stegen set is from the last season. We could update him.

Please do so. He really should be a bit better than Leno. And I guess you dont need my suggestions

He`s different to leno. If I see leno his most important thing are his response. not just his reflexes, also how qucik he felt a dicision in his own game. Tht is was rellay impress me.

Ter Stegen is more Versatile. With a better eye for the position. He`s really good in controlling the box, just his stupid run on sunday was a bit unneeded. But he`s young. Also ter Stegen is more safe in catch balls, or handle the situation where he could catch or whre he should punch the ball. he smarter than leno. Leno is more in instrinct GK, ter Stegen a thinking GK
Don't bother just to be better than your contemporaries or predecessors. Try to be better than yourself
Top

I know what you mean and youre right. In real football that is, but if you compare the two sets of stats, they are nearly the same, Leno being a bit better.

More in the ter Stegen thread, where the rest of my text belongs...
Top

he really likes to punch....
Top

maybe it's too early let's wait for the end of season...
he hadn't much time to prove himself in this aspect
Top

Kev asked me for some GK updates after the first half of the season, and I ´ll do them between christmas and the new year. and just a short reminder for me, also - yes he`s in his response better than ter Stegen. ter Stegen is more complete, better in his positional play with a higher jumpf, more communicative - but Leno is in his response, how quick he felt a decision, how quick he handles on a real high level for his age
Don't bother just to be better than your contemporaries or predecessors. Try to be better than yourself
Top

Don´t know too much of Gk as you. But i think he can better in DEF, even he is still very young and a huge growth gap - he has a very good positional sense, maybe in crosses and corners isn't too safe but has decent control of "penalty area", also considering he hasn't more 1vs1 stopper card/star and his low TW value that works together with DEF. I saw him 1-2 points higher. The best and most known example for other users, is the game against Barcelona, if he wasn't show that good positional sense and covering angles, Leverkusen probably had lost 10-1 (same as SportFreunde Stiller song

), and as a regularly Leverkusen follower that shows every single weekend. No doubt that his main attribute is his responsiveness.
...U dared to enter my world...

At all PEs rated them GKs over there whole career not just by one single season. I like the balance of his set and think it works pretty well. I eman a Casillas is maybe afte rhis last season not on 97 in def but with a view to his whole career and his average value 97 is reasonable. I like the way of thinking at GKs. leno played his first season, was a nice one, but he has toprove himself in more years at all. He has a much high response value and I like it cause that is is main assist. If you watch my set of Scze?? and Courtois I like the balance between them three. Also Wiese is rated on 84 - so an 83 for Leno is right in my eyes, if we reduce it on defense what inclusing his whole defensive behaviour. also he`s higher rated in GK-skills what`s included his whole to the ball movement.
Don't bother just to be better than your contemporaries or predecessors. Try to be better than yourself
Top

Sounds reasonable and you make a point comparing him with Wiese. Probably, his last set was a bit overpowered considering it was with old standards. Hope he can keep at least this form or improve in next season.
...U dared to enter my world...

Seems that Zenit SP is after him, if it's true I'd like to know how much money they're willing to put on the table^^ Interesting for Leno due to the fact that he has the option to play for Russia since his parents came from there.
Top

Thought he would have *Penalty Stopper, but he doesn't. I think he merits it.
Top

Yet another penalty saved...
Top

And again...
Okay, not every penalty is good, but it can't be a coincidence that he saves almost every penalty. He needs *Penalty Stopper. He screams for it.
Top

MrEskola wrote:And again...
Okay, not every penalty is good, but it can't be a coincidence that he saves almost every penalty. He needs *Penalty Stopper. He screams for it.