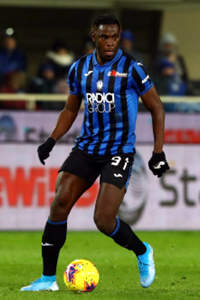 Nice set! TBH I know him by name only. Is he well player? For the TYPE of player and his nice STAmay be his MENT is white, don't you think?
Top

Could be but let's see how he develops in Estudiantes

He's average player, at least in Colombian League he was a great surprise, because he is young. Buit here he could be average except he develops a lot
Farts stinks like a mother fucker!
Top

Ahh thanks for explanation, I think that he can't be starter with this forward: Boselli and Gata Fernandez and Roro Lopez as substitute.
Top

Ye, unless one of them gets injuried. Well, I think he might play 15/10 last minutes in some games.
Farts stinks like a mother fucker!
Top

he's looked at as a great promise in Colombia.
very surprised that Estudiantes signed him though!
Top

Vs Quilmes. Strange I didn't comment in this thread, I do love how this guy plays. He's really smart and a good prospect to the future. He played a while and scored in the last minute making a Goal Poacher goal, very smart to move and hold the ball as a real CF. I do like a lot how he holds the ball with his back, he's strong as hell and in long distances he's really fast. Typical fast player which his ACC isn't good but in long distances he's really good. His passes weren't so good, pretty average but If you pay attention in his movements, he looks like Trezeguet by moments (obvious differences though). He moves a lot, and physically he's really good too.

Vs Rafaela. Wow, this guy is an insane striker, overlooked by a lot of people, but he has the CF manual. His movements are hard and sometimes looks slow, but he's a hell of fast player in long runs, his acceleration isn't good but when he takes speed he's difficult to reach. Yesterday scored two goals and was the best of the match, I haven't doubts his Attack is in yellow's, really intelligent to move and dismark himself. First a penalty and second intelligent to make doubious Sara and steal the ball:

Vs Argentinos. He is a rock, is very hard and Difficult to move, had a good game, could pivot quietly among CB's. TS has one interesting, but has a hard time accelerating, the reaction is also good. He scored with his head.

Hell of striker really, one of the best in AFA. Given a deserved update after following him this tournament.
Top

vs Independiente. You could see his BB, on one occasion I saw downing two defenders down in the same action and no fouls, and I think they were Valles and Velazquez.
Top

Vs San Martín. This guy is a beast really, won all aerial and body battles. Awesome positioning but lacks agility. Also his passing is decent.

Vs Unión. Had a really good first half, fighting everyball and showing crazy speed in long distances, winning every opponent with his speed+balance. The guy is superb in attack, really intelligent.
Top

It is much stronger than Santiago Silva in the melee, I think it should be 92- 93 in Body Balance.
Top

Great player, very smart to move in the area and a great scorer.

I agree with the Body Balance review
Top

I think it's much stronger than silva who has 90, is a beast.
Top

For the games I saw him now do not think his BB is orange, now I think it should be RED. Made to look like a dicky Cubero and Dominguez. Nobody could get the ball, his TS is also very high.
Top

jorgecavs wrote:For the games I saw him now do not think his BB is orange, now I think it should be RED. Made to look like a dicky Cubero and Dominguez. Nobody could get the ball, his TS is also very high.

I leave a video to update this beast:

I only suggest RED in BB, the others stats I leave to the criterion of Victor and Jorge.

All his goals in Estudiantes:

It was the first time I watched him live, in the stadium and this guy is a total beast, physically is crazy, really hard to pull down and he creates constant danger, all the time...in the stadium you watch other things that you can not see in the TV...and his off the ball movements are crazy, all the time running, creating spaces and fighting...hell of striker.
Top
Post Reply
77 posts

Return to “Atalanta BC”