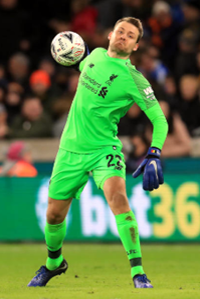 Do not know how to define it, but it is irregular in its reaction, making great saves, but also sometimes ...
Minute:6.21

he makes childish mistakes and good saves in the same game, maybe it's his GKS, because the response that has is "good",
If Liverpool wants to play champions, should find a better keeper with good reflexes and good GKS

you are only suggesting def -2 and response going to 94, no need to be muddling your intent by adding all of the other useless stats which haven't been changed.

to address that, i wouldn't agree with either change, response is not above 89 and we've talked about it in this thread, unless you have a different view or new evidence, simply suggesting something does little to convince anyone at this point.
If you don't put effort into your post, i won't put effort in my response.
Top

vinnie wrote:you are only suggesting def -2 and response going to 94, no need to be muddling your intent by adding all of the other useless stats which haven't been changed.

to address that, i wouldn't agree with either change, response is not above 89 and we've talked about it in this thread, unless you have a different view or new evidence, simply suggesting something does little to convince anyone at this point.

Well, I just feel a little bit weird to compare Mignolet to Reina, Reina seems to be too "good" to Mignolet, there's no reason LFC left him and seeked for MIgnolet instead ( if only judged by the datas here). From where I stand, we can see that last season in Sunderland and this season first few matches, MIgnolet showed us world-class responses ( But he has some problem with defense positioning, so sometimes he can make some stupid mistakes either), and he lost many scores after, not all his fault ( Rodgers kept changing the pair of centre-backs, they really had some poor shows) I think we could readjust his datas, 84 is too weak for a real Mignolet, just my opinion.
Top

i don't understand, you say 84 is too weak for him, yet you've given him 84 goalkeeping skill in your suggestions? what do you mean by that sentence?

and also, reina is a better goalkeeper then mignolet.

It's my belief that goalkeepers playing in poor teams like sunderland was get overrated due to them getting overexposure of good saves (which aren't that amazing to me either, when i saw mignolet at sunderland), and very lenient judgement regarding mistakes. we've seen this season that mignolet is a pretty nice shot stopper, but two things in particular, that his reflexes are not exceptional, and he's very weak against crosses and with his handling. There were a couple of moments where if mignolet was really deserving of higher response then he already has, then he would have made a save, or prevented a goal, and yet he didn't. that is indicative enough for me.

unless something changes, mignolet developes, and shows some improvement in these areas, as indicated by future performances, theres nothing that a suggestion has any worth for.
If you don't put effort into your post, i won't put effort in my response.
Top

awesome save against Southampton:

Are you sure about form 6? There are games when he is outstanding , then another he is average , and make stupid mistakes. I just want to say that he is not constant in his form , 5 looks more realistic to me.
Top

There's no way he's deserving of form 6, he's barely looking like a form 5 at the moment. He's been woeful for Liverpool to put it nicely and he's looking more and more like a major weak point for them as the season goes on.

His mistakes from just the last three games.

Yeah, hes a serious liability. Always has been, but it's even worse now. Average keeper at best. Not liking that 91 resp either.
Top

so funny !tbh he is better than that

Experts were too early to judge him ? ehh ! Not so shit any more ! isn't he ?
vamos arriba la celeste !
Top

13 clean sheets this season in the PL, only Courtois has the same number and he sits behind a better defensive team. In the second half of the season he has been more commanding in the box which I think has helped, I think his body balance has improved somewhat that has helped with defending corners and crosses maybe it could go up by 1 or 2. More importantly, form needs to go back up to 5 or 6, probably 6 his form has been average to high since he has gone back into as the first choice for Liverpool, we are talking a few of months. So I think we can say his drop of form was a temporary dip.
Top
Post Reply
46 posts