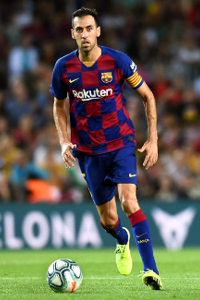 seilaja17 wrote:Konami should create a new special abilty called ''Diving expert'' for players like him.

A-SK wrote:that's just bullocks. are you telling me the whole ladders are based on his his given balance? jesus. so basically, the Spanish league players aren't debatable because the players are perfect according to your ladders? how about the Spanish mods just lock every thread and force people into using the stats? that doesn't sound like much a forum, but we can't possibly ruin the balance of the ladders, can we?

not a good enough reason, buddy. someone like sergio wouldn't deserve to be sitting on the same value (for balance) as fabian ernst. that guy resembles gattuso, who does this guy resemble? the lanky, thin tree outside my house. point made. there are too many people debating whether he deserves his given balance, but some mods are just turning a blind to acceptable suggestions because of their unnecessary level of stubbornness. it really is becoming impossible to debate on this forum.

hahahahaha omg thats a good call.... btw its really odd seeing you in the spanish thread, not that theres anything wrong, im used to seeing you all over the turkish threads...

as for the balance, i reckon that 82 might sound fair, considering carrick's example....
Top

Asanovic to eat it, wear it on his shoulders and played football...

I'd like to see better discussion on some other topics considering that we had 4/5 pages with only some interesting posts where people like zuo, Xyder, Monkevsky or Fides (sorry if I forgot someone) tries to explain his thoughts with comparisons or reasoning. This is why some of the better statsmakers are out of this database.

I'm not saying that I'm good, but impartiality, knowleadge and reasoning is what we lack here and what it's tiring.
Editing La Liga...
Top

In his previous set he had: Header 79 and Jump 76. Now, after this update, he has: Header: 81 and Jump: 82. I am really curious what was the reason for doing it, am I missing something? Did he become an expert in air just recently? Becasue his height 189cm and jump 82 makes him VERY hard to beat in air (better than De Rossi for example), which just isn't true. Same thing about DA and DS changes, but who am I to say anything. Also not so sure that he deserves same passing stats as Cambiasso.
Top

Is his really this good a passer? I always see him pick the simplest pass and nothing ever really risky, so I'm not sure he should be on yellow numbers.
Top

I would go with a higher number in defence like a 77-78. He never loses the position, giving some relief to the team in opposing counterattacks, and he relies more on his positional sense than his speed to catch up opponents. Yaya Touré and Lass are more speed-based and both are 75, while Assunçao is more positional and he is a 78, and Busquets isn't worst than assunçao at this, he has probably been the best DMF of the league this year, and he is excelling at the WC.
"Her own father got this child on her? We are well rid of her, then. I will not suffer such abominations here. This is not King's Landing."
Top

Absolutley disagree. 75 is generous number for him.
Top

jurgens wrote:Absolutley disagree. 75 is generous number for him.

I don't think 75 is generous, 'cause he show a good positional sense, over the majority of midfielders, for example Xabi Alonso who sits on 74, for this reason he outplaced Touré to the bench in Barça, being Touré a more complete player than Busquets. It's a bit soon for me going to a better value like Agüero suggested, but in a near future we can take it in consideration.

All that tells me is la liga is poorly rated. There is many players in serie a rated on a 75 def, who are by far and large superior to Busquests in postioning. He took toures places for questionable reasons aswell....
Top

Like Xyder said, X.Alonso is on 74 and Premier's members rate him. Busquets is, with no doubt, better than him on terms of positioning. More? I say no at the moment. This defence is helped a lot for his incredible teamplay what makes him a player who understands a lot where is his team and where he has to help.
Editing La Liga...
Top

after the WC, i think he needs an update. for me was the best spanish player, always superb (except the first mtch against suiza)
Top

I think his BB can drop a point or two. I don't think he's stronger than Assuncao 80, just equal. I don't think that Assuncao's BB should go up anw. And I'm not sure about those passing stats ... As he always play along the like of Xavi, Iniesta, his main target is just sweep the ball and put them back to those 2 with simple passes.
Top

He has Header 81 and Jump 82, while Xabi Alonso has Header 71 and Jump 72. Can anybody explain me this 10 point difference between them? Or is this just +10 point handicap for playing in Barcelona, in that case ok, everything clear.
Top

Cruel wrote:He has Header 81 and Jump 82, while Xabi Alonso has Header 71 and Jump 72. Can anybody explain me this 10 point difference between them? Or is this just +10 point handicap for playing in Barcelona, in that case ok, everything clear.

Good, good... a clever guy, you got the point of the forum.

ANyway, yes, it should be lower, especially his jump. Header should be reduced a bit too, but not as much as his leap.
I want my son Brooklyn to be christianized, but I still don't know in which religion - David Beckham
Top

Well, as a start like a lot of people demand header and jump should be lower, I was thinkin' on 76, one point under Touré, who furthermore is two centimeters taller, both of them arrive clearly to aerial balls and it's 6 points under the current value. For header I'll go with 77, 'cause his headers are good, he don't go up in the corner kicks, 'cause he prefers to preserve the back, but like as_10 said, it's better than his jump.
Further to this, I'll lower 1 point his balance. In the WC use so good his positional sense and his good response rather than use pure strengh (like Touré can do), to steal balls, with his height he doesn't have so many problems to steal balls in game.
For his A/D ratio seems fine to me, maybe we can lower 1 point his attack, but never his defence, he is a bit better than Xabi Alonso who sits on 74.
Any thoughts about these?

Cruel wrote:He has Header 81 and Jump 82, while Xabi Alonso has Header 71 and Jump 72. Can anybody explain me this 10 point difference between them? Or is this just +10 point handicap for playing in Barcelona, in that case ok, everything clear.

If you took the time you spend in talking shit of the mods to look Xabi Alonso's thread, you would see that people already suggested his jump and header to be increased less than a month ago. If you don't think there's a 10 point gap between them, not only suggest the decrease of Busquets, but support a raise for Xabi too (and he deserves a raise, he's not that bullshit).
"Her own father got this child on her? We are well rid of her, then. I will not suffer such abominations here. This is not King's Landing."
Top

Alright, Busquets isn't that little diving shit he use to be. He's improved A LOT. We've seen him in the World Cup and how he made Sneijder useless. We've also seen how he's improved this season. Yes, Pep has placed him in a deeper position more like a sweeper. Anyways, we've seen how he's improved in defending (tightly marking people) and balance. His balance and defence needs to be increased. I also suggest *marking.
Top
Post Reply
692 posts