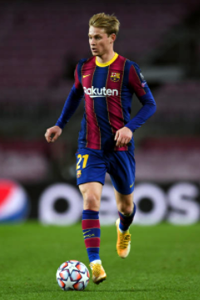 He definitely should be pushed up to something closer to 87 spa.
Top

i already liked him on ajax but now i've officialy fallen in love with his style of play. he looks really good at everything he does, kinda like xavi, but, without the same range of passing quality which i believe could be improved and is already showing glympses of amazing stuff this season. i have really big hopes for him, also, his curling seems pretty underrated.

we'll see at the end of the season if he can develop even more and meet the expectations of the club that as we saw are quite high, can't afford to miss a pass that the critics jump to the jugular.

a little conversation with Ocrin about him on the discord channel

Great match today vs Napoli, carried two dead weights on midfield (aka rakitic and roberto), also had a great lofted assist to Messi that was annuled after. It seems he is just made for this high-intensity type of match and he just came from a long injury.
Top I can't find the cause of P18 - Track Back card , it makes no sense because it is activated only for attackers SA AC
Top

Came here to give a look at him, very nicely "surprised" to see such a low sa but I admit in almost ok with that, his shooting style (basically a xavis tikitaka approach, it's almost impossible to see him shoot, really his last far option) also his results are almost horrible, just bad atm.

He's a really dominant playmaker on the field, many years I haven't seen a player who is single hand so, really, influent dictsting tempos and moods in the game, really impressive. This said I feel that his final 25m passing/decision making is really much inferior to his first and second third dominating work. But yet his attack is 76 nonetheless.

Edit: I'd instantly give him leader card, that despite the name, is the closest thing to the old *playmaking star we have. His teammates will perform/work better, so, it's similar to the effect a playmaker has on the team with his abilities. Also, did he really need speeding bullet?
Saving Private Adrian he might deserve a raise in jumping and heading. he is winning headers from taller players consistently this season
Top

Gotta say his physical and off the ball package looks extremely impressive. His BB, jumping, speed all look higher now and he's even cleaner and consistent technically nowadays. He basically has little to no weakness right now, absolute beast of a player.
Everyone knew it was impossible. Then came along a fool who didn't know it, and he did it.
Top His AGG w.r.t. his recent performances is quite a bit higher than 68. I think in recent games he's been asked by the coach to just burst into the box whenever his team has possession in wide areas and gotta say it's working very nicely for them. I don't know if this is a permanent change of role in his career or he'll again start to stay deep, but to represent Frenkie as he is now, his AGG should be upped to about 82-83.
Top

He's playing better than in Ajax, just a more well-rounded player who's certainly way more mature, polished and outstanding athletically.
He is a rare type, he's some weird mix of Modric, Valverde and Kovacic. His passing is gaining stability and range , he's becoming way more consistent in terms of picking good through balls, lob passes, still incredible speed on the ball paired with polished control and tidy DA, no way in hell is he getting pushed or outpaced in duels either.

He's a box to box midfielder with great sense for the goal now with everything what made him special in Ajax, Koeman may have struggled with 4-2-3-1, but did he get absolute best from Frenkie who's the backbone of this team now together with Araujo.

ATT definitely deserves a raise, I'd say up to 80
TS - at least 82- he's just really fast and he is the one chasing counters, he shows his speed very often
BB - he rarely gets beaten due to strength these days, just a tank, 82-83 looks fitting imo
Stamina - 92 - he's relentless, plays every game, runs every game and never looks tired, covers so much ground and doesn't avoid sprints, ground or aerial duels
AGG as Suji said can be bumped to low yellow

I'd also say his passing needs higher values but no recommended values so far, need to rewatch his games to give more precise numbers, but the pass he pulled yday for the first goal is somewhat regular now for him and that looks low yellow SPS imo

Jump 100% deserves raise, other than goalscoring most obvious improvement in his game is just how dominant he became in aerial duels, his success rate went up by 10+% compared to last season.

He's looking like one of the best midfielders in the world, literally no weaknesses in his game, none
Top

My only question on his set is why his form is so low, he plays consistently well and almost all minutes for Barcelona and Netherlands, should be 6 or higher
Top

sunsaegnim wrote:My only question on his set is why his form is so low, he plays consistently well and almost all minutes for Barcelona and Netherlands, should be 6 or higher

6 would be fair tbh. But I also disagree with his pace abilities. His acceleration actually is better than his top speed. He could burst out his speed, but he's a lot better in to do it in short distance. So his top speed actually is quite overrated here and his acceleration should be higher than top speed.
Live life for the moment, because everything else is uncertain.
Top
Post Reply
52 posts