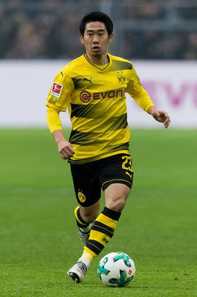 Ok there are some underrated areas so let me suggest which one to increase.

In the last season at Dortmunt, he had 13 assists and created so many chances by his passing skills.
http://www.youtube.com/watch?v=MAslXaukJqE

Also, if stamina of Nagatomo is 96, so should kagawa be or a little less, maybe around 94.

what do you think
Top

Thanks for that video. It basically shows just what I'm talking about, no speed on passes, most of his passes are sideways, aerial passes much better than grounded. Simple passer, I see no reason to higher his short passing from that video, and thats a compilation of his best passes.
Top

oh let me provide the evidence for his stamina with 94.

In the interview during the TV show called "foot brain" in Japan, he said that he commuted by bicycle to school that was 15 miles away from his house.(30 miles a day for nearly 3 years of his high school years)

Another fact is that, when he was playing in the J-league at Ceresso Osaka, his coach said that he created an outstanding record with his stats on stamina.

Furthermore, he had the most average running distance in the entire Bundesliga with 12.36km after fall in 2011-2012 season. And he was the second highest after the season.

I really think he wears an oxygen tank that is transparent.lol
Top

Looks like a candidate for *1-touch pass from that video.
Visit my alt thread: http://pesstatsdatabase.com/viewtopic.php?f=1011&t=25348
Top

Looks like a candidate for *1-touch pass from that video.

Also some quick turns and accurate through balls, not to mention lovely chipped passes.
Top

Agree with Jurgens about Shinji's short passing, current numbers are fine. I don't see much reason to change anything at the moment, maybe ATT going up a little but apart from that the numbers represent him very good.
Top

I like the update but i think his ATK, Agility, SPA and SPS can going up a little by 1or 2 other atrubyte are ok.
Top

His 1st start for man utd

great pre sesson games by Kagawa he will become a great pleyer for man utd. i have some sugestion for his stats:
ATK:83 he has very good atacking intelegence
DA:86-87 he control the ball close to his feet and its very hard to take the ball from him.
SPA:82-83 he is very accurate passer
add S02 - Passer
Top

i think his att intelligence is much higher then 81, and his tec is not quite 88, a few lower actually. tec and agi could switch.

and his passing seems harsh, read all that discussion about him being a sideways passer, but i saw that at least his passes had decent pace tonight, they were creative, and accurate. Maybe someone else share their view on that?
If you don't put effort into your post, i won't put effort in my response.
Top

one league game and your saying "tech and agi could switch"... seriously?
Top

What an unbelievable thing to say vinnie. Tech is one of the hardest stats to rate, a player might recive a hardball once every two games, and needs months of observing to settle on a number for it... and you are seriously suggesting to change after people watched him for months based on one league match?
Top

I don't see why tech would need a decrease anyway. He displayed some pretty good first-touches today, including a mid-air first-touch pass. From what I've seen, he deserves his current value.

Not wrong to talk about tech, wrong to suggest a switch after one competive game. It's just a number thats been settled on after literal weeks of evaluation... one game can't change that.
Top

I thought his touch looked great tonight. If the game was anything to go by 88 suits him fine considering Rooney is an 87.
People gon' be people. They gon' lie, they gon' cheat, they gon' steal, but as long you get yours, you keep it moving.
Top

he is simply a very intelligent simple passer, give and goes, 1 touch passes and so. Hardly a mistake, but i dont get why he needs higher at this point, his accuracy, aggressiveness and speed of passes is average.
Descansa en paz Chucho
Top

Korinov wrote:I don't see why tech would need a decrease anyway. He displayed some pretty good first-touches today, including a mid-air first-touch pass. From what I've seen, he deserves his current value.

Totally agree about today's match.What about a decrease at SPS??Generally you cant find players with greys on that section...Its the "grey stat" fear we have on this forum!!!(just joking)
PANIONIOS RULES.GENOVA E SOLO BLUCERCHIATA - FORZA SAMP.
GLORY GLORY FOR UNITED!!!
Top
Post Reply
230 posts