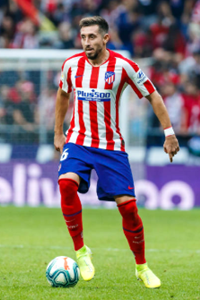 Generally an expected update, maybe his SPA could still come up a bit, aswell as his Attacking awareness could be 3, since he attacks alot... His agression could easilly be 84 / 85, since he appears very often inside the box... Maybe he isn't this fast? but, then aggain.. thanks1

His passing is descent but not consistent. He can misplace passes or his accuracy is slightly off, passing to the wrong legg of a player etc. His AGG depends on the match. I've seen him play at Porto and staying a lot more behind then a number like 84 or 85 would suggest really. TS could be slightly overrated, but i think its around 82.
Sporting Clube de Portugal meu amor / Working on new sets and updating Liga Sagres
Top

His short passing is bordering yellows for sure
Top

Are you sure? He misses many passes considered easy...
I gave him no more than one 76.

Ok, but he's not any worst than someone like Raires or so, i'm not saying he deserves yellows, just that he's close to it. 74 is too low.
Top

Are you sure? He misses many passes considered easy...
I gave him no more than one 76.

Like i mentioned before he def misses a lot of easy passes. Don't agree JMVP with his passing bordering yellows for sure.
Sporting Clube de Portugal meu amor / Working on new sets and updating Liga Sagres
Top

Well, it seems that the SET still needs some improvements.

Shot Accuracy need's a little upgrade (73/74 max) and his Ball Control is way better than just 78, players like André André and Danilo Pereira (80) Renato Sanches and Joao Mário (82) Ruben Neves (83) or even Adrien Silva (85) are not better than Herrera in Ball Control skill. He is a little bit clumsy and sometimes he fail a few easy passes but his technical ability and ball control his way better than all the players i refer above. Something like 84/85 would be reasonable for him right now.
Top

No way Herrera is has good as Adrien or Renato in BC, seriously. Same as Andre Andre seems right to me.
Top

so on what numbers can we agree for the update?
Top

This is what 'd change:

Plus those values i would raise BC to 80's. STA cant be at orange values, he has 88 maximum
Top

I feel he's a better passer than this. Overall really solid passer, anywhere on the field really. Very good player.