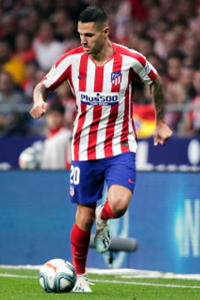 Good work as always. Probably we can talk about Tato of Xerez eh? I have a base set for him, and I would like to hear your opinions about him

He suffered a serious injury and I think he isn't so fast than before.

Are now for now.

We can upgrade Balance +1

And he plays as SS in the start of the season.
The intelligent people are full of doubts while the stupid ones are full of confidence.
Top

Am I the only one who knows this amazing player?
The intelligent people are full of doubts while the stupid ones are full of confidence.
Top

Am I the only one who knows this amazing player?

No, you arent the only one who knows this guy. He is quite good, a shame he got that 6 month injury last season that cutted his progression curve. He has a lot of potential, he and Viera are the key players of UDLP.
Top

Vitolo is very very good. Yes, he was injured 6 months... He and Jonathan Viera will play in Primera División in the next season. UDLP has a lot of players of its youth system: Vitolo, Viera, Vicente Gómez, Ruymán, Juanpe, Sergio and Francis Suárez, Dani and Javi Castellano, David García... and they all are players of good level!
Las Palmas is my favourite team of Segunda División now.
The intelligent people are full of doubts while the stupid ones are full of confidence.
Top

Apparently Valencia is close to signing him.
Top

Pretty interesting player. Pacey, decent dribbling ability... his shooting is a bit weird, his placement isn't really bad (probably a bit better than 75) but his shoot technique leaves a lot to be desired, and that puts a heavy strain on his effectivity. I'm updating SA to 77 and lowering ST to 70.

He is playing really good this season , scoring 8 goals and giving 7 assists in all competitions and also he is called up by Spanish NT for the match against Ukraine : http://www.transfermarkt.com/vitolo/pro ... eler/67082
I think that he can have an update , mostly +2/3 in TS , DS , EP and STA

), a few things that stand out, SPA can go up to 77-79 can be incisive on the edge of the box and during 1-2's..SPS should be dropped to 72-73 his passes though penetrative often get cut out if its over 5 meters.. already has *outside but want to comment can do nice passes with the outside right..Aas was mentioned above DA looks a touch better at 84/85 along with DS to 85, he is good at pace with the ball nicely nestled in his feet..I also think I seen a bit more than 78 EP/agiliy, but not sure what number to suggest. Stamina can be a raised a bit, as part of the system Sevilla's winger track back quite a bit and he still does do plenty of runs when the team goes on the offensive - the team has really physically demanding roles at SB and SMF simply because of their style, hence the need to often sub out these players (i.e. Vitolo), besides a fresh winger late on is a nightmare.

Form might be 4...initially I thought he was a young player because of the way he was referred to a few times by commentators in different matches, thus a typical erratic young player, but he is 26!?..I think then he his an older erratic player, his form is up and down...but I'll comeback after I see more matches...

so much binge watching...
Top

Really good match tonight vs Atl. Bilbao, he contributed a lot to winning the ball back, good passing and in general a threat with the ball. I think I was mistaken about agility, at times he can do a turn or twist in the low 80's, but that is not his game..if anything it might be a touch less (or just fine where it is lol), but he is more of a tall strong dribbler, BB in fact is what may be in the 81-82 range, resists many challenges easily and bumps other players off the ball consistently.

Stamina is definitely a bit better than 79.

His shirt name says "VICTOR MACHIN"? I only ever see "VITOLO".
Top

A player never in bench, never tired in second half, always giving his best at second half, fisically superior...and in PSD has 79 Stamina...when could be easily 87

This site is never what it was before...

watching him he reminds me to nolito,very similar style of play.Btw Da looks a bit too low at 83,and for tec as well,ive seen good runs with the ball at his feet,and da looks like way better,something like 87.And for tec (85) should be a good value for him,for what ive seen and i dont know yet if he deserves a better value in sta..well after all is a Sampaoli team

Really good tonight despite Sevilla playing a man down - he started as a free AMF/CMF on the right ahead of N'zonzi and Iborra (3-5-2), but after the red card he ended up the lone outlet in a 4-4-1.

Claudio14 wrote:watching him he reminds me to nolito,very similar style of play.Btw Da looks a bit too low at 83,and for tec as well,ive seen good runs with the ball at his feet,and da looks like way better,something like 87.And for tec (85) should be a good value for him,for what ive seen and i dont know yet if he deserves a better value in sta..well after all is a Sampaoli team

Dribble Accuracy at 87 I can see at times, I just think he was in the past inconsistent and ought to be Form/Condition 4 if he is going to get this sort of technical rating, otherwise I'm still for more DA, but an 85 like I previously suggested.

Dribble Speed also to 85 as I previously mentioned, possibly in conjunction with a drop in Agility to better highlight his style.

TECH 85..I am not sure he needs this..his trapping has not really stood out to me..maybe if Form goes down it can be 84.


As billy and I mentioned previously the man needs more Stamina, it's not just under Sampaoli it was the past two seasons, that is part of him a real good work ethic and putting in a shift..the 87 I think might be a bit much I am more in the frame of 85-86, he did get subbed off a fair bit as I recall under Emery (as he really liked fresh wide players, because of how much ground they were expected to cover), but he still did play many matches the full 90 putting in a good amount of miles and aggressive running..comparing to Alex Sandro of Juve that guy does NOT tire out at all and runs as much if not more than Vitolo, so I think he should be below him.


Agility may be a tad lower 76? He is not an agile dribbler in style at all, he makes straight power runs using BB to hold off challengers at high speed, what do you guys think?

Shirt Name: VITOLO it is not VICTOR MACHIN
Top

how about yellow attack, he so active on when they attacking the opponent
-[P]-[S]-[M]-
Top

Well, he's an Atlético player now so I'm moving him. He was poor for LP as far as i'm concerned, but I'm somewhat excited about this signing...if a guy like Vitolo doesn't fit in Cholo's system then I don't know who will? Because clearly people like Carrasco, Gaitán or Oliver Torres can't...but surely Vitolo is gonna end up playing as something like WB or even SB eventually.

Set is rather good but now that he's playing consistently I've managed to catch a few things that interest me regarding Vitolo.

This I had already suspected, but he's a player who warrants high STA. I'm not sure he could warrant oranges (probably yes, but the span since he's joined Atlético and recovered his best level is not too extensive), but surely something around the lines of 89 STA seems in order. So far for Atleti he hasn't played many full matches but still, the amount of running this guy does per match can be notable. He's really active defensively, I think I've already mentioned he seems like a good choice for a WB. He's not neccesarily a clean tackler or a great defender, but he's actually a good asset at disposession and he understands pressing mechanics well. He's the closest thing Atlético have had to Arda Turan, not as godly technically, but still a pretty good and solid workhorse with neat dribbling and ball covering, defensive aptitude and more than decent at everything else. I also think his passing is arguabily better than this.

This is my view on him at this moment: