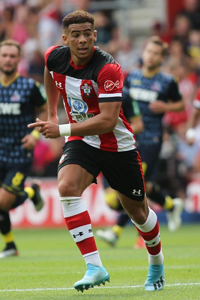 Set I had sent over to Ocrin to add. He’s been on fire this season in terms of his goal tally. Really good partnership up front for Birmingham this season and he’s burst in to the scene and is bound to draw interest from the EPL. Rightfully so. I personally rated him as a few points higher in sa and st after catching a lot of footage of him, but it is what it is. That’s basically his standout point: shooting. He’s quite weak, not anything standout for speed, not much of a dribbler, can do some nice short passes but not anything more than simple but good decisions. He’s got average shot power, but he places them extremely well. His technique for shots also is a standout quality as it’s the only real way he scores. I think had him at 83 sa and 80-81 or something st. That’s important to note just given that championship players/teams are hard to cover with a small group of mods and it’s unlikely to be touched for a few years. Anyways, he’s really not great in a whole lot but his shooting separates him from the pack and could make him a good EPL player in the right system. Don’t ask him to be a target man, but e can work off a bigger partner effectively as he does now. Continuing to grow as the season progresses and given his young age the upward trend will be something to keep tabs on
Top

I went back and was watching more of him. My comments above about his shot accuracy are validated. I will try to remember to come back and post pictures, but most of his goals were hitting the lower corners on really well placed shots. His shooting in general is really good. I don’t know why some call him a speedster (fifa gave him 88 speed I think...) as he’s kinda quick but low yellows max from what I see. Who knows. Anyways, good set and I wanted to just come back and make sure to back up that shot accuracy is a real strength of his. 83 really doesn’t feel wrong and a floor of 82 seems fair to me.

Edit: I found a few runs that show he’s faster and just doesn’t use it to get free. He’s not running fast to get in behind or overlap. That’s why I wasn’t seeing it when I was watching him. I saw it when he was pressing the ball and other times when he was running on the break (not a thing the team did a lot) and had space to go into. It was with a few more games that I saw this. Mid yellow ts is pretty decent value but would prefer another to weigh in on this. 84-85 seems possible. None of his goals were speed based either for those wishing to watch some of his highlights from this past season. Sort of deceiving.
Top

Both TS and ACC need an upgrade, he's quick as fuck. Thinking something like TS 84 and ACC 79. I can't find videos of it but he's good at covering ground quickly when pressing. Like I've said small sample size but definitely something that needs an upgrade IMO.

Edit: Not something urgent that needs upgrading right away but keep an eye on Res, he's very clever player off the ball.
Top

godsplan wrote:Both TS and ACC need an upgrade, he's quick as fuck. Thinking something like TS 84 and ACC 79. I can't find videos of it but he's good at covering ground quickly when pressing. Like I've said small sample size but definitely something that needs an upgrade IMO.

Edit: Not something urgent that needs upgrading right away but keep an eye on Res, he's very clever player off the ball.

He for sure is showing this now. I think the ACC needs to be 84 along with 85 TS now that I really got to see it a few times for Southampton at full tilt. Dude has wheels, just not always able to show it for various reasons. Also, his defensive work is really quite good, looks like another pressing forward for Soton and I am starting to rate him around 41-42 defense. The goals will come for him as he is doing the right things, just will need to keep his head about him until it does. Adams is an EPL level player so hoping he can start turning that on.
Top
Post Reply
5 posts • Page 1 of 1