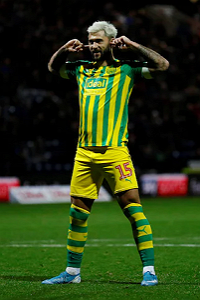 Special Ability: *scoring and *positioning
Sorry. I try to explain my ideas with bad English:)
WE9:LE is the Best!
Top

Like ur suggestion. But he's not that fast. So I think Dribble Speed and Top Speed can gow lower than 84 and 83. But he is very strong I would give him BB 85.
Top

he is a fox in the box type of striker. rarely scores from outside of the box. lots of headers, tap ins . needs high attack,response along with card fox in the box & "scoring+*positioning .
vamos arriba la celeste !
Top

Why is there an obsession with making CF's so slow, 70 DS? , he moves well with the ball when barring down towards goal......If Andy Carrol has TS 80 and DS 70.........Austin clearly needs higher values, because both those aspects of his game are better

Southampton Football Club is delighted to announce the signing of Charlie Austin on a four-and-a-half-year contract.http://www.saintsfc.co.uk/news/article/ ... 04717.aspx

I would drop his att to 80-81 tops and all passing stats to mid 60s with sps staying at 70. He’s a VERY poor passer and terrible under pressure. Not good at linkup play either
Top

I wouldn't drop his attack, I'd mainly drop his stamina, his condition and his Injury Tolerance.
Top

Is that yellow attack still deserved?
Everyone knew it was impossible. Then came along a fool who didn't know it, and he did it.
Top

Currently working on all West Brom. He’s one of the ones I’ll get to first. Seen half his games this season and finishing up the rest. Short answer: upper greens. Long answer: coming later

He’s limited, but still has a real poachers instinct. Rescued several games at the death.

Addition:
I will make a preliminary update tomorrow to get it from yellow. He’s more 78-79 and a lot of limitations in other areas even more severe. One of the most dangerous players, but not at his peak anymore for sure.
Top
Post Reply
15 posts • Page 1 of 1