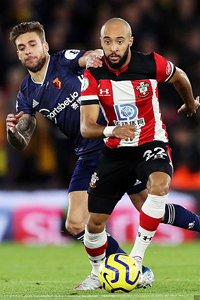 Conservative (which I guess is underststandable given his age) but good to see him here. Such an exciting prospect.
"DEBT IS THE ROAD TO RUIN" David Gill August 2004

certainly is, feel fee to suggest changes for champ players, far to few people do, its such a quality league yet stats wise so not
Top

I Watched him a couple of times, and he realy impressed me, he seemed geniunly faster and more agile than this (plus could deserve Darting Run), but again, jsut saw him a few times.
Top

I Watched him a couple of times, and he realy impressed me, he seemed geniunly faster and more agile than this (plus could deserve Darting Run), but again, jsut saw him a few times.
Top

He is right foot.
All my faces here: http://facesbyedgar12.blogspot.mx
Stats, faces and more here: http://pesarmy.freeforums.org
Top

stu, don't wanna sound like an ass, but such high speed stats don't really suit him and this set is still far too conservative and underrating him in so many aspects of his game, if sterling sitting casually at ATT 78 or such then nathan is at least a green value, same goes for DA, he's definitely underrated by a bunch his direct running at his opponents and his control are his main weapons. also, removing CMF does seem odd, as he's perfectly capable to play almost anywhere in the midfield and can be usually found roaming around the central positions of the pitch or even swap his position with someone else during a game as he's even more dangerous in the middle...

but he is that fast if anything ds needs to come down for that, as for the general underrating I didn't want to seem over zealous (which considering the update I gave ben davies earlier is a bit hypocritical now I think about it) and I don't remember removing positions but if I did it wss purely accidental
Top

how does that look?
Top One of the fastest players in premiership now... And he usualy plays at CF this season, in a 4-4-2 formation...

I think his speed and acceleration need to be around 90... But his finishing is still not at a good rate, so he's shoot attributes are fine...
Top

Given a slight update

EDIT or not, seems the editor glitching atm, will do it when its working again, will also give tadic his deserved at least in speed stats nerf down
Top

This guy was the pivotal player for their turnaround and movement up the table to safety. Great to see him and the team as a whole with all pistols firing under the new coach. He played much better in behind Ings as he can find space and the two quick players can make interchanging runs to open up pockets of space for the other to exploit. He will be one to watch going into the first full season under the manager and their new energetic style.
Top