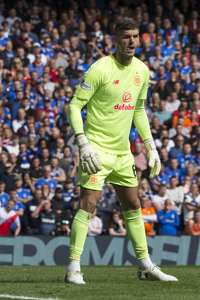 Fraser has been outstanding for us this season combining superb reflex saves with strong handling even in poor conditions.

Looking at the ladders he's at least on a par with the likes of Fabianski based on what I've seen this season, and based on form is actually superior, so can I suggest an increase to at least 82 if not 83?
Top

While I won't deny he needs a increase, what your suggesting is ridicoulous, do you really think he as good as joe lewis and keiren westwood, the best keepers outside of the top flight?

And you can't compare a league 1 keeper to a premier league keeper, especailly flabianski, who should sit actually on 80/81 TBH

Chelseakid08 wrote:While I won't deny he needs a increase, what your suggesting is ridicoulous, do you really think he as good as joe lewis and keiren westwood, the best keepers outside of the top flight?

Please also bear in mind that as a long time Norwich supporter I've seen a hell of a lot of Joe Lewis whilst he was here with us, and have also followed his career with interest during his loan time at Morecambe and his transfer to Peterboro.

Forster could walk into virtually ANY Championship side based on his performances for us, and whilst I fully agree that League 1 strikers are not the equal of Prem, or often CCC players, they're not total garbage either, and I've seen some truly impressive saves from very high quality strikes which if you'd seen without knowing the players involved, would have assumed was at a higher level than League 1.

Don't get me wrong, I'm not trying to make Forster into some superstar keeper, or claim that League 1 football is great, but just because that's where he's playing, it doesn't mean that he's not better than the league.

All young players have to start somewhere, and this is often very difficult for young keepers.

As for a comparison to Fabianski, why shouldn't we compare L1 to Prem players if we believe there is enough parity to make it a viable comparions? Sticking with Norwich, Doherty was once a prem player with Spurs and us, just because we're now in L1 does that mean that Doherty has automatically become crap and can no longer be compared with players at his previous level?

I stand by my rating of Forster but obviously the rest of the PSD members will hopefully vocalise their own opinions to get a value we're all happy with.
Top

He's not as good as Krul who sits on 77 (the exact same number). If Forster was increased then Krul would need an update which I don't think he deserves.

To be honest I wouldn't disagree with an improvement for Krul, however he's not had any real game time this season so the only thing we can judge him on is the odd appearance for Newcastle, and his loan time at Falkirk and Carlisle.

The logic would suggest that as Forster was behind Krul at Newcastle, then Krul is the superior keeper, but I'd argue that there's very little truly between them and that they both have their strengths in slightly different areas.

I did find a very good comment on one of the Newcastle Blogs regarding Krul and Forster:
"Timmy Krul has been flawless when hes come in and he made some ridiculous saves when he was on loan at Falkirk. However Forster has been nothing short of brilliant at Norwich. Someone needs to sit down with them both explain the situation and see who is up for the fight for the position. Krul is the shot stopper, Forster is the 6″6 dominant keeper. "
(original article at: http://www.nufcblog.com/2010/02/17/can-newcastle-keep-both-tim-krul-and-fraser-forster/)

So in the interests of fairness maybe Forster's keeper ability should be increased to 80/81 with Krul to 81/82? I'd still want to see more of Krul at the minute though to make a truly fair comparison, but he was impressive when I've seen him previously.
Top

I disagree, theirs not a massive gap between them, but if you think he overated just post in his thread, Im always open to ideas
Top

I meant in general, ask any fan of the championship, Scott Loach is even better than him, as is Ipswich's new keeper Brian Murphy, I could name quite a few keepers in the division who'd be better than him.
Top

I think that maybe Forster could sit on 79 and Krul on 80, but I'm still not so sure.

you seriously think loach is better? well I haven't watched loach since I made his stats so has he improved or what or was I too harsh on him
Top

If anything I think Loach may be slightly over-generous in a couple of areas, but again I'm viewing this in comparison to similar aged/skilled players.

There's no way that Loach is 3-4 points better than Forster in a few areas, I think if anything it's Forster who's underrated, not Loach, although being fair we'd not seen as much of Forster until his long-term loan at Norwich.
Top

Cuz I think His reflex is nearly same or more than our 1st GK, Harper.

What about your suggestion??
NEWCASTLE UNITED
PROUD TO BE TOONARMY
Top

I'd agree with 85, what do you think about updating his Keeper Skills WYNN?

He's playing in League One! Give him time in the championship or even in the PL next year before you pre-empt how good he'll be.
Top

I''m not keen on raising his GK skills, just needed another opinion but I do think his response should come up.

I'm not sure that his Keeper skill is higher than tim Krul.

Now rate him in this stats until comeback to PL is the best way to do.
NEWCASTLE UNITED
PROUD TO BE TOONARMY
Top

Yeah I'd agree with you on that.

[Quote"WYNN"]I'm not sure that his Keeper skill is higher than tim Krul.[/quote]

BTW: Another newcastle player has come off the production line in my stat thread, not sure who I should do next though?
Top

WYNN wrote:Now rate him in this stats until comeback to PL is the best way to do.

Why on earth do we need to wait for a player to play in the PL to re-assess their stats???

Some of the leagues covered here at PSD aren't that much better than L1 level, and it's very easy to see the L1 players who are good enough for the CCC or PL.

Forster has been immense this season, much like Joe Hart has at Birmingham, and changes are definitely warranted, especially with Norwich and Newcastle's promotion, as he's likely to return again on loan (discussions happening atm).
Top
Post Reply
50 posts