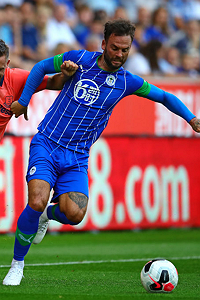 He doesn't look that solid defensive in terms, if you ask me.
I'll carefully keep an eye on him for Soton's match against Man U, in order to suggest a new DEF value.
"Willy Wanda is Chinese!!!"
Top

agree, DEF doesn't need to be this high, also i don't know if anyone else has noticed, but last season, he's racked up a total of 13 assists.

His communication and decison on the 3rd goal by gervinho showed his very very impaired defensive intelligence and communication,

Held up the OX physically when the OX tried to turn him, seems stronger then 77 BB, about 79-80?

He seemed to be trying to play CB against arsenal, and it was funny watching him move with the d-line, he wasn't picking up the players he should have been, he was constantly antsy, trying to move up to challenge unmarked players infront of him (which would have left a massive hole in the middle of the D-line) and wasn't communicating with his D.

I think having him at higher RES with lower TW will replicate his constant stepping up to meet challenges (foolishly). I remember there was disucssion on RES being style as well ability, depending on other factors. I think with his TW so low, having high RES will replicate that.

CB for Wigan now, so this'll be a fun rework from scratch.
Top

Oklahomastate010 wrote:CB for Wigan now, so this'll be a fun rework from scratch.

given it a rework
Top

Oklahomastate010 wrote:CB for Wigan now, so this'll be a fun rework from scratch.

given it a rework

Looks a lot better. I don’t know him too well, but this is much more like what I’ve seen.
Top
Post Reply
27 posts