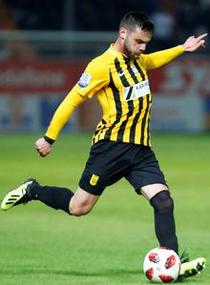 AC Omonoia Nicosia for the next Season.

Surely, he is quicker than what he is currently given...
Top

AC Omonoia Nicosia for the next Season.

Surely, he is quicker than what he is currently given...

Konstantinides impressed whenever he played this Season for Omonoia on-loan from PAOK Salonica.
In the first-half of the Season, he was an automatic-starter for Omonoia and definitely one of their most consistent and valuable players.
In fact, he became known as one of the best promising young Full-Backs of the whole League, impressing with his attacking runs and contribution, his overall pace and movement both on and off the ball, and generally his outstanding defensive play(for his age, at least).
However, a combination of reasons that included a muscle injury, the sacking of Omonoia's Greek Technical Director Nikos Dabizas, and the recent break-through in the first-team at Right-Back of academy youngster Andreas Panayiotou "Filiotis", and even the good performances of squad-rotational/back-up player Marios Demetriou, resulted in Konstantinides' appearances being limited in the second-half of the Season.
To be honest, more specifically, Omonoia have probably realized that they couldn't keep hold of Konstantinides after the end of his loan because he is likely to be in PAOK's plans for next Season, and after his great run in the team in the first-half of the Season was interrupted by a muscle injury, they decided to give chances at Right-Back to the other two boys of the team, because most likely they will still be with them next Season.
I don't know if Konstantinides has improved so much that he would deserve a place in PAOK's first-eleven next Season, but I think that his evident improvement would definitely make him at least a good squad-player, second-choice Right-Back for PAOK. I have said the same last Season about Efthymios Koulouris(that he would be good as second-choice Striker at PAOK) when he was out-on-loan at Anorthosis, and I think that my prediction didn't go much wrong.
Below I have listed many suggested changes/upgrades for Konstantinides' Set, based on his outstanding performances for Omonoia. I doubt that he would deserve all of these upgrades, but definitely many of them make sense, but firstly I would like to know the opinion of people like "bitz" who follow the Greek Super League really closely.