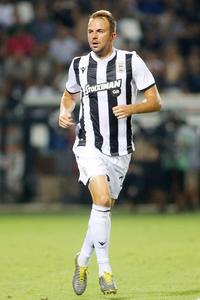 Having a very prolific spell of games since the season started. With Maurício and Vieirinha on the stands Paok's been overreliant on Biseswar to distribute, drive the team forward and be a playmaker at the same time. It's both slowed down their game and made it easier to intercept at it's source. Giannoulis and Misic have gradually taken some of that burden off him. Both capable crossers, Giannoulis has given a reliable passing option and final ball to the left flank and Misic has provided support mainly to the right. He does well to give depth to his area of coverage, generally leaving his position in the center with a purpose to either back up his wingback or winger, also doing his piece in distribution. He's a strong passer and set piece taker with a surprisingly clean shot. His stamina for all his efforts is rather limited and he is more of a natural attacking midfielder than a balanced CM, though he is surprisingly well adjusted in his play-style. He's provided a needed service given Augusto and Esiti's unconvincing first impressions and Ferreira could very well keep him on now that Maurício's finally back.
Top

He's done a brilliant job at generating opportunities from unsuspecting angles and from distance in various fashion. His through passes against Asteras and OFI especially were impeccable. He is also the first in successful crosses in the league atm with 25/57.

Another brilliant through ball !
Top

He looks improved in physical condition and defending, he even looks faster at times. His passing always impresses. He will be a fantastic get for Paok if they can buy him, i can't help but think he'd have a good shot at Sporting and a better league at this moment of his career. One of the season's MVPs and certainly the difference maker for Paok's claim to the title this year, a real outlier in his position in the whole of the league.
Top

3 assists today in the cup game vs OFI, the first one is great. Raised SPA, SPS and LPS.

Incredible effort, representative of how fought alone the whole game against Pao and looked the best player on the pitch. Excellent save by Dioudis as well.
Top