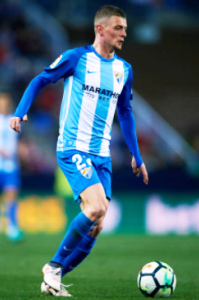 18-year old Maxime Lestienne is a new signing for Brugge, coming over from the bankrupt Excelsior Mouscroun. The young winger started out his career there in 1996, playing his first game for his childhood side at the age of 17. Not long after his debut, several Belgium and foreign clubs were interested in the young lad but the club did not want to sell him and kept hold of their prized asset for a season longer. In the following, turbulent year, Lestienne had an impressive season but Mouscroun themselves went bankrupt which saw Maxime turn into a free agent this summer. Despite interest from Everton and PSV, Brugge managed to lure the starlet towards their club and signed him on a 2,5 year deal.

Lestienne is a talented young dribbler, using his small and agile frame to quickly change direction whilst on the ball. This often startles his opponents and, combined with some good control over the ball and decent pace, often leaves them flat-footed as the youngster works his way through. Maxime also possess over an effective passing range and has also been a set-piece taker for Mouscroun, delivering a good few accurate free- and corner kicks into the box to create a goalscoring chance.

Main let-down in his game is his wastefulness in front of goal though. He misses a lot of 100% chances one on one because of his bad composure and dodgy accuracy in finishing. Quite often will you see him blast into the goalkeeper or scuff a chance when he gets pressured even the slightest. Physically, he's also quite weak but that's understandable considering his small and fragile build.

stoppage time, gudjohnsen shoots on a half volley from outside the area and the moron just needs to flick it in but no, he decides it's better to try a heel flick from 5 meters out as that's more fancy than just tapping it in...ugh...and of course the goalie catches it as the heel flick took all of the power outta the shot from gudjohnsen...and did i mention it was 0-0?

I am not a fan of him but I cant say Maxime doenst work hard. TEN can be in the 70s for sure.
Top

I think he is and will become more a good addition for PSV. He looks ugly with his hair I think, but I like his play. He's a very hard worker for an attacking winger. Sta is at least mid yellows. Ten and TW need raising as well and Def Aw 2.
Perhaps slightly higher shooting and Att?
Top

Well i have no idea about his ATT yet. I saw him vs ADO and I wasnt impressed by him.
Top