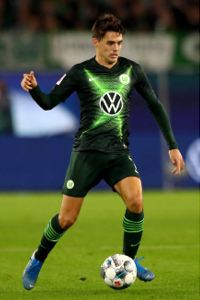 Great goal, let's hope he scores more of those.
BTW, please use youtube or URL code for videos.
Top

Great goal, let's hope he scores more of those.
BTW, please use youtube or URL code for videos.

Wouldn't be too bad if he will continue with scoring screamers like this one.

Move him to Wolfsburg
Relja's not dead
Top

I think he is by far one of the finest and better dribblers in Bundesliga. I think he can have DA in 87-88 without any problem.

He is also a nice trapper, has a refined first touch.

Also his passing is way better, SPA, SPS, LPA, LPS need a raise. His long passes are always accurate and dangerous and his short passes are always progressive an help to develop plays and danger of course. I was thinking something about SPA/SPS: 79-78 LPA/LPS: 79-79

He is also better attacking, when he is on point he could be sharp and be a headache for any defender. Maybe something around 75-76 compared to other wingers in the league.
Better to die quick, fighting on your feet, than to live forever, begging on your knees!
Top

Passing: it is a pretty simple ability and I do not really see him trying tough passes

Tech: clean touch on him

After review and discussion of Discord, I propose the following changes to his speed and dribbling stats:

Also, would highlight his passing probably is around 74 for short passing and 76 for long passing. ATT to around 74-75 since he is still developing as that refined goal and final third threat, and then a small bump to technique.
Top

he was involed in a goal every 47 minutes this season. He is crazy talented but since last season he is showing capabilty to create things out of nothing and becoming a real thread when he wants but other times he will just dribble and dribble without making any good play ayer. He is right on the edge to see if he is worth at least 75 in ATT. His shooting seems a bit better too.
Better to die quick, fighting on your feet, than to live forever, begging on your knees!
Top
Post Reply
9 posts • Page 1 of 1