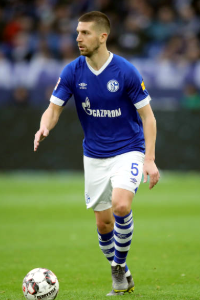 i forgot to post a post-match comment on him after the heavy loss against Juve last weekend. i've already suggested gray MENT for him when he was discussed in the Missing Players thread and the reason was that i just don't trust teens with green MENT as they often show that more than 90% of them don't deserve it and still lack the proper senior experience, and the same thing is with him...he may cope well with teams like Novara and Lecce but he simply can't handle the Europe wannabes and those from the top 5.

A prime example of this was against Juve this weekend, the Viola went down in the opening stages of the game and a few minutes later Cerci was shown a red by the ref, from that moment forwards Nastasić was completely unrecognizable and couldn't cope even with the simplest tasks put before him, he was making mistake after mistake and was hardly seen the entire match, and not to say that he was being caught out of position every once in a while...

That's the main gripe i have with the youngsters, they're introduced in the 1st Team starting line-ups after a few promising cameo app's and all of a sudden all of us expect that they'll act like a pro footballer with 10+ years of exp in the league and on an International level, the amount of those kind of youngsters with that kind of coolness and composure are a rare breed, and Nastasić is not one of them, he's just a rough diamond which needs A LOT of cutting and modeling around the edges...if i were to compare him with a promising young defender it would be Marco Capuano from Pescara, the thing with Capuano is that he may lack a bit on the tactical sense that Nastasić has and is more sluggish than him, but he compensates that with his coolness and composure which is something admirable for young players.

I'm not suggesting anything (yet), but i would most certainly like to keep an eye on his DEF and even more on his MENT which i simply can't swallow to be on the greens...

Matija Nastasic is very talented young defender. During previous half-season in the Fiore he played almost flawlessly whenever coach Rossi gave him the opportunity (despite the poor season Viola he was one of the positives aspcts). For such young defender he is very calm when opposition pressures him and even when opposition manages to get pass him (happened rarely during past few months), he is able to chase them down and clear the ball without much problems. Here are a few suggestions of mine for his stats:

1. Defence: 76-->79 - Excellent at defensive positioning and overall defensive duties. He proved this in Serie A games, and I'm pretty sure he should be 1 point above Frederik SØrensen (78) in this ability, and similar to Marquinhos (79).

2. Stamina: 80-->81 & Mentality/Tenacity: 73-->77 - I would maybe suggest Stamina: 82 (on Ahmed Hegazy level), since he seems quite fit and since he plays in same rhythm during all 90 minutes, but I'm taking into account that that he wasn't undisputed first choice at his position (but in the end of the season yes), and he had a chance to rest when he wasn't used, so it's hard to claim that he would be able to play, for example 16 games per half-season, in same rhythm. Mentality should be 77-78 because it seemed to me that his retains same concentration during the complete match, and even if he makes a mistake (happens rarely like Fiorentina 0 vs Juventus 5) he doesn't allow to be distracted by that (for example, Cristián Zapata who sits on 76, looks more shaken by his own mistakes and that's why he should definitely be under Nastasic in Mentality/Tenacity).

4. Response: 78-->80 - Many times I was amazed with his ability to anticipate opposition's movement and react in just the right moment (mostly because I don't expect such good game reading from a player of his age, but I guess if you're good age isn't the restricting factor ). For me, he's definitely above Federico Fernandez and Kamil Glik in this ability (both players have Response: 79), but also under Ezrquiel Muñoz (82).

5. Short Pass Accuracy: 73-->74, Short Pass Speed: 75-->76, Long Pass Accuracy: 74-->75, Long Pass Speed: 73-->74 - Calm and precise passer. His short passes are pretty precise for such young defender, but he doesn't often try to send them over longer distances. He doesn't use long balls often, but when he decides to send a long pass, he does it solidly for a defender.

8. Team Work: 73-->76 - His general movement on the field and his ability to work with other defenders is on pretty good level, so I think it's safe to say that he can be on the same level as Hegazy and 1 point over Marquinhos.

see if he has a chance to show his game and qualities, I have seen very little of him.
and if his performance justifies the suggestions, I look good
"No soy el mejor del mundo, pero creo que no hay nadie mejor que yo"
Jose Mourinho
Top

he playd full season for Fiorentina in start line-up
Top

playing a full season as a first team regular in a team which evaded relegation by a margin ain't really a great achievement. and not to mention that he's pretty weak for a CB and generally for someone of his stature the current 82 in BB seems generous. And one more thing, he's mentally fragile like an infant.

Just one thing, why is his Attack so low ? I mean, I remember of his period in Serbian Teleoptik, he was very good at it, also he played as SB sometimes.
Top

lack of experience played a trick on him in the goal, but it was not all bad ... both teams showed a very good level!
"No soy el mejor del mundo, pero creo que no hay nadie mejor que yo"
Jose Mourinho
Top

Today made a good game,
I think seriously that should upgrade, these values ​​are below his performances,
the suggestions are good
"No soy el mejor del mundo, pero creo que no hay nadie mejor que yo"
Jose Mourinho
Top

Hmm I thought he was pretty mediocre and had poor positioning and tactical intelligence. Not a great game from what I think of it, at times I wondered where the hell he was because kompany would be all alone in the centre d while the othr team was in attack
If you don't put effort into your post, i won't put effort in my response.
Top

Is Lescott injured or someting? Or Mancini chosing Nastasic over Joleon?
Top

Hes not injured, so yeah.
Top

I do not know how to qualify the performance of him and others,
Borussia stood very well and closed all roads to City
Error Rodwell's goal
a tie with flavor to defeat
"No soy el mejor del mundo, pero creo que no hay nadie mejor que yo"
Jose Mourinho
Top

Hart was the only notable
but his topic is locked
great saves!
"No soy el mejor del mundo, pero creo que no hay nadie mejor que yo"
Jose Mourinho
Top

He was on the field? Didn't notice at all.
Top

Malakayi wrote:He was on the field? Didn't notice at all.

believe it or not he was playing,
not revealed because alongside Kompany was
Hart only had an excellent game, the others were in debt
"No soy el mejor del mundo, pero creo que no hay nadie mejor que yo"
Jose Mourinho
Top

he got burned by Reus
Top

Obviously, if Reus has TS / ACC 89/86...y Nastasic, TS / ACC 79/77
It was logical that the sprint win Reus
He had no fault, guilt was of Rodwell
"No soy el mejor del mundo, pero creo que no hay nadie mejor que yo"
Jose Mourinho
Top

in a game where the defenders stood out was the man of the match ... someone could tell me why?
not see anything remarkable in him, maybe good crosses or judgment to avoid goals...in the game .he is same .. goes unnoticed