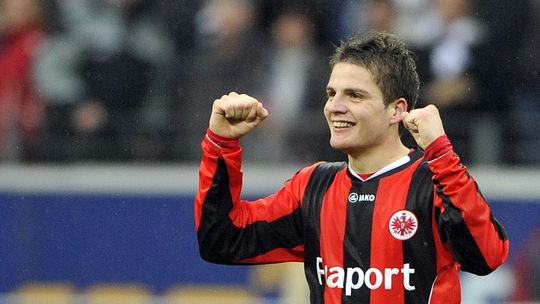 Why the Quick Turn card?
Top

He does those Quick Turns all the time. If you have the chance of watching him play, you will see it definitely. Its a good skill he got there!
Eintracht Frankfurt Season Ticket Holder
Top

I can confirm that
Top

Now one and a half year later he his the captain of the team and a real leader.
And he still improves but he has still his biggest weakness he is really bad in shooting.

His ATT/DEF radio can be a little better. His passing improves, too.
Also his Teamwork and Mentality he leads the team through the mittlefield and opens the game through his passes.
At least i would at Box to Box.

I agree with all your suggestions, no doubt. He's the authentic "sheriff" of the team. I saw 8-9 matches of Eintracht Frankfurt of this season.
The intelligent people are full of doubts while the stupid ones are full of confidence.
Top

HIs registed position have to be DMF. HIs role at Frankfurt has change a bit. Now with Rode as CMF, Schwegler is much more Defensive than Offensive. His ATT/DEF radio has to be changed. I see him in Defence better than in the Offence.
HIs ST need a decrease 73 is to high i think. He really isn´t a scorer.
HIs DA is also to high.
His Long Passes increased a bit.

Updated.
The intelligent people are full of doubts while the stupid ones are full of confidence.
Top

Yes that truth. It was a real great goal. But the question is if one or two shots with this curve are enough for the card. Because I didn´t see more shots like this from him.
Top

dunno, but he's no long ranger anyway, he won't shoot more often with this card, only his shots will be harder to predict for the keeper.
Top

Yes think the same. Also it´s a kind of trick card and like flicking or so a player don´t show it that often so i´m going to add the card right away.
Top

Can get a little raise in FKA and Curl. He shoots more and more freekicks in the last games. But I don´t see him as an very good freekick taker. Maybe FKA around 74-75 and Curl in 80-81.
Top

Gave him the needed global update. Raise in Response and STA were the most important. Togehter with Rode the heart of the squad.
Top

This guy is classy. Too bad he has a lot of injury problems, othewhise he would be more known.
Better to die quick, fighting on your feet, than to live forever, begging on your knees!
Top
Post Reply
35 posts