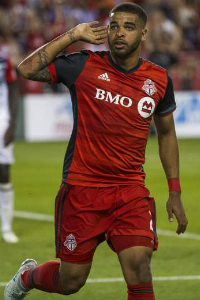 Brace two minutes apart as sub to win the game. https://youtu.be/iYC-K-zN9w4?t=230 That second was so unexpected, Boxall so slow to clear.

Saved a 2017 classic version with lower Attack (I had too little reference then as league did not exist and I could not rank lesser forwards right), gave him an update. He actually gets a good goal return for how many minutes he gets, he has played a little over 10 full matches since 2016, rest is just bit parts of either 20 - 60 mins and he has 14 goals in 4 seasons having been 4th pick in most of them behind Giovinco, Altidore, Rickettes and now Boyd and Akinola get more time than him.

His leaps to get to headers has astonished me recently.

He needs to loose the pudge though, a bit too much Troy Deeney and not enough Adriano to him. He fluctuates in weight, sometimes he looks leaner and is visibly more fast and a menace doing quick turns and dribbling players, other times I think he doubts he will play and is unprofessional and lets himself go, then when he does play, looks slow and lethargic to plays.
Top
Post Reply
2 posts • Page 1 of 1