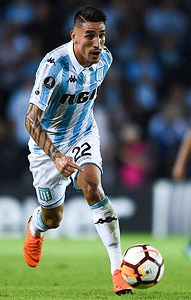 his contribution in defense lately seems pretty good, even the other day vs colon played kinda lcmf near of gago, helping in defense when fabra went to the attack, he leaves his position in attack to stand up in the middle line but again he is always playing in the limit of the red card, a shame his behaviour because he is a skilful player.
Top

Paablito wrote:his contribution in defense lately seems pretty good, even the other day vs colon played kinda lcmf near of gago, helping in defense when fabra went to the attack, he leaves his position in attack to stand up in the middle line but again he is always playing in the limit of the red card, a shame his behaviour because he is a skilful player.

Yeah, yesterday Centu did played in a mixed role, Miguel Almiron´s style and he did almost everything good. Very good match
Top

What about give him a little bit better bb,spa and jump? i was thinking in something like bb: 76, spa:75 and jump: 78. Also he's no longer that selfish to deserve tw:65, i mean, sometimes he does but he grew up as footballer. He looks more mature in the pitch nowadays. Less focused to be a selfish dumbass and more focused to helping the team either defensive contribution or offensive contribution.
Top

Being selfish is not related at all with TW
Top

Teamwork relates to supportive off the ball movement. A player with high Teamwork (Xavi, for example) supports their teammates by moving around the field, making themselves available for potentional passes. Additionally, in the case of defenders, Teamwork effects a player's ability to work with his defensive teammates as a unit.

So that description is wrong?
Top

What does that have any relation with being selfish? The definition says it: off the ball movement
Top

That´s what was i tried to say for defensive/offensive contribution. In my opinion he was very selfish and lazy when he was young but now he cares a little bit more about tactics and being more concerned to help his teammates either to defensive role or offensive role. Thats why Guiilermo choosed him instead Seba Perez and Barrios to plays as CMF last semester. Because can do both things at same time and because he bring us dynamic in the midfield just as Bentancur does. I didn't say anything wrong, i guess.
Top

Yup, you implied his tw must be higher because he isn't as selfish as he used to be. And that's not related at all with TW. Then you said that about helping his teammates in offensive and I don't know if you are (now) referring to pass the ball or move all around to get it and be available for a pass. Sinceraly, I wouldn't raise it, current number seems ok.
Top

Hardily he could stay in here as Boca requested for another loan and SP wanna transfer him.

I think he needs an update which reflect his change. He´s no longer that skilled player who likes to play alone, i mean yeah, he still can do it but in a good way. Waiting for get fouled to benefit the team or to dribbling opposite players to generate chances to score.

Spoiler: show
attack: 75 as i said before, he became in a good desition maker. Being succesfull almost always.

bb: 76 as lucas said in previous post, hes gotten stronger than before, its not so ease to outmuscled him as before. I think hes worthy of that increasment.

ts: 84 looks a little bit slower in long runs than before

acc: 86 his first burst its not impressive as before, he lost some first burst as well, imo.

response: now hes more concerned to waiting for dead balls to score, looking quite responsive to catch them. Probably he get that in SP taking into account he played as false nine in Brasil. Perhaps 77 would be fair

ds: 85 just as his ts and acc. He lost pace on the ball imo , strange because he used to be freaking fast on it

spa: 75 he became in a very decent short passer, nothing really good to highlight but at least he has some vision to make good passes.

jump: 78 he proved to be a very good jump on SP and Boca, perhaps his header accuracy its not the best and fluctuate a lot but his jumping ability very good

da: probably youre right about that vic, it looks worse but im not sure so i let you this.

Updated and moved this moron to

why on earth did this guy go back to Genoa? Can't find the sense of this move, he didn't shine in his first period here
Top

Epsi wrote:why on earth did this guy go back to Genoa? Can't find the sense of this move, he didn't shine in his first period here

Well, he made a good job when he played in Boca tbh, he is more mature now inside the pitch and he was key for Boca to win the championship (he was injured long time btw). Aside that, he's a moron outside, always in problems, he does even have a gender violencie issue...I guess he can be useful, but he's an idiot and his head isn't and won't be ready to a big step in bigger teams. Boca couldn't buy him cause Sao Paulo asked too much money for his transfer, so they gave up.
Top

Another thing is if genoa wants him in the squad, because all Vickingo said and his attitude outside the pitch doesn't help him at all.

But theres been in the air the possibility that genoa buys the 70% of centurión and then send him on loan to boca, but thats what boca is looking for more than genoa i think.
!!!CHUPETE LA CONCHA DE TU HERMANA!! , !!VAMOS CARAJO TE QUIERO VER!! , !! TE QUIERO VER PAPÁ!!
Top

Epsi wrote:why on earth did this guy go back to Genoa? Can't find the sense of this move, he didn't shine in his first period here

I forgot to say he was too young when he went to Genoa the first time...he's a brainless idiot now and he's more mature and learnt a little bit how to play football...imagine how quickly he went to Europe and how idiot and inmature he was back then. I wouldn't blame him for his first spell tbh, he should have been playing in Racing 2 or 3 more years and then go to Europe. Also he didn't play that much and I remember he was even used as LWB, impossible his performances could be good...he's a total offensive player...yeah he learnt to help in defence but if you imagine him in 3-5-1-1 playing LWB, well, that's waste your money and waste him cause he won't be good.
Top

Deal broken, back to

Baggio just said he can't find someone similar to him, but he really likes Centurion. WTF
Top