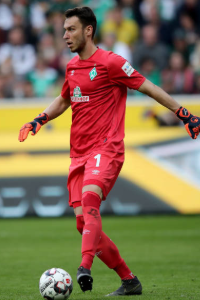 He had an impressive maiden season at Bremen.
I know he had a fairly decent reputation back in the Czech League, but he clearly excedeed the expectations of most people in Bundesliga.

His response is probably around low 90s; it somewhat reminds me of Cech in his mid 20s. Pavlenka is surely unagile, and his jump is not really massive for someone of his size. But, most of the times, his reactions are so sharp, neatly timed. So he will usually manage the save a goal which would be fairly unstoppable otherwise, no matter how good he is at diving or jumping.
"Willy Wanda is Chinese!!!"
Top

Surely not enough to make a whole set on this, but it certainly summarizes his best two assets as a keeper: Response and parrying the ball properly after stopping a shot.
"Willy Wanda is Chinese!!!"
Top

He's still as impressive as he gradually became over the course of last season. He's really, really hard to beat with shots from mid or long range, mostly thanks to his massive response, his well-timed dives and the way he uses his extremely long arms to divert the ball towards a safe place after a shot.

Unfortunately, he struggles to dominate his box when needing to cut crosses or corner kicks, even with that towering height and not been exactly a weakling. In most of those cases, he tends to punch the ball away instead of grabbing the ball immediately.
"Willy Wanda is Chinese!!!"
Top

Sure, he conceeded five goals against England. But none of them were really of Pavlenka's fault. I know Czech NT has been in an erratic form for years, but I never saw such a fragile Czech D-Line when facing counter attacks. Most of the scoring chances were close to the 18-yard box, bar Sterling 3rd goal from long range, which was actually a shot deflected in a Czech defender.

Pavlenka is nearly invincible when stopping shots from long range, but there's not much he can do which such a poor D-Line ahead of him.
"Willy Wanda is Chinese!!!"
Top

Why judging him over a "bad" game?. Palvenka is such an amazing GK, he is extremely important for Bremen, I always makes like 4 or 5 important saves per game. Actually he is the reason sometimes Bremen wins o ties a game.
Better to die quick, fighting on your feet, than to live forever, begging on your knees!
Top

Akephalos wrote:Why judging him over a "bad" game?. Palvenka is such an amazing GK, he is extremely important for Bremen, I always makes like 4 or 5 important saves per game. Actually he is the reason sometimes Bremen wins o ties a game.

You clearly misread the previous comment. He is indeed a solid keeper.

If he wasn't playing yesterday, his NT would have conceeded four or five additional goal.
My point was about how badly the Czech NT performed last night. With Kaderabek playing in a below-par form for his standards. Celutska as an almost amateur CB. Kalas showing why he's continously loaned to

Championship sides instead of fighting for a 1st team spot at Chelsea or a competitive club elsewhere. And Filip Novak, who just displayed speed and massive stamina but he looked weak when attacking and even worse when defending.
"Willy Wanda is Chinese!!!"
Top

I knew what you meant, i was talking in a more general view, when most of the people think goalkeepers are always responsible.

But yeah he is great, I'm always impressed by him.
Better to die quick, fighting on your feet, than to live forever, begging on your knees!
Top

If last season he was the hero Bremen needed, so ar he has been so inconsisent and error prone, not to mention the few amount of games he showed that reds response. Really rough season for Pavlenka so far, he has a lot of responsability in the 2 goals conceeded against Freiburg.
Better to die quick, fighting on your feet, than to live forever, begging on your knees!
Top

His footwork, which caused to conceed Freiburg's opener yesterday, tends to be poor regardless of his current form.

I don't think we need to revamp this set overall. Probably TW has to be lowered a bit more, to stress on how much he struggles sometimes with his own movements inside his box, as well as not being really commanding with the D-Line ahead of him.
"Willy Wanda is Chinese!!!"
Top

Yeah, I never said statsshould be decreased, I was just writting about how he hasnt been able to perform like he used to.
Better to die quick, fighting on your feet, than to live forever, begging on your knees!
Top

Well, he's been in a bad form lately indeed.
That's why he's also lost his Czech NT main GK place in favour of Vaclik, who's been exceptional this season so far for Sevilla.
"Willy Wanda is Chinese!!!"
Top

Bad performance again. He is in such a bad form, he does not provides the safety he used to, he is not as confident as he was last season and you can tell he is doubfoul in every situation he is involved. At this point I think Kapino shoud have a chance, everytime he played he was very good.

If Pavlenka keeps performing like that in the ipcoming matches, I think it would be fair to apply some changes in his set.
Better to die quick, fighting on your feet, than to live forever, begging on your knees!
Top
Post Reply
13 posts • Page 1 of 1