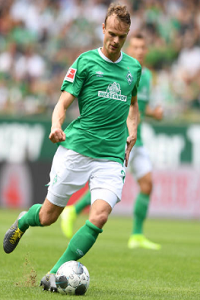 I was surprised with his performances lately, of course he is doing the best he can but he is putting a lot of effort to fit in and be useful and so far he has been really decent and sober. Ha had moments of nice anticipation and timing, he still needs to learn about being a complete CB but he has tools to work with, technically he is way better, im sure of that. He assumed very well the pressure to play at Bundesliga and with a lot of injuries in the back he never strugled in his duties. I'm very pleased with his production.

Nice performances against Everton, Atlas, Union Berlin and dortmund so far.
Better to die quick, fighting on your feet, than to live forever, begging on your knees!
Top

He had a nice duel today agaisnt Alario, his timing is spot on lately and he actually won a lot of interventions today due to his nice timing and anticipation. He seems very confident and comfortable playing with the ball, he grabs the ball and always makes clean exits/passes to Sahin or Bittencourt. I like him a lot, he won a place in the starter 11 with a lot of effort and he is the most efficient CB in Bremen so far!

And he is the the main character of a lovely story, he used to play 3rd and 4th division not so long ago! He didnt have much luck when he was in Hamburger 10 years ago, then he mostly play in 3rd division and his carreer never took off as he wanted, so he returned to Bremen to play for Werder Bremen II in his last years, so he can contribute with his experience to the younger academy players of Bremen. But in a training day he impressed Florian Kohfeldt (coach) and slowly he gain a spot in the first squad and then, luckky for him, 4 CB's in the team were injuried! So he blucle up and showed a lot of determination in every minute he played in pre-season, he played some games as CB but it wasnt his main position, so he learned a lot during these last games and currently he is the first option for CB! not even Langkamp and Veljkovic could return to the starter 11, and thats very valuable!

So he is the perfect example on how dreams come true if you try really hard and he actually puts so much effort in every game so he is a fan favorite now! More than decent games so far, and yeah he deserves better numbers but I will take my time for a future update, because he has some many strenghts but also things he needs to correct to be even better!
Better to die quick, fighting on your feet, than to live forever, begging on your knees!
Top

MOTM today against Gladbach. He was so damn good poking, tacling and spot on in his timing and anticipations. Honestly, I've ben asking for this presence in the starter 11 a long time ago, so this performance is proof enough he should play way more often. Just great defensive work, nice tactical awareness and decent ball distribution from him.
Better to die quick, fighting on your feet, than to live forever, begging on your knees!
Top
Post Reply
4 posts • Page 1 of 1