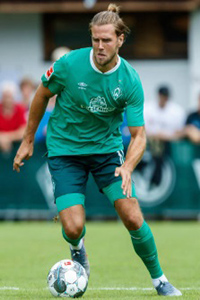 Sorry Kruger13 but I have a bit other view of him

In the Liga Total Cup he impressed me really. Balance 77 for an 188 cm big guy is to low for me. He isn´t really strong but also not that weak. There are just something in which I can agree with you and that are Shooting, Passing, Header, Technique and Teamwork. Condition 4 for an 19 years old guy how didn´t get often the change to play with Pizarro infront of himis really harsh. As normal number I see there an 5. Till now for me he showed that he has a good feeling for the right run. So Attack is to low. He is also faster than this. Also DS is a bit to low. AGgression can go up a few points. He is a full CF without much defensive work. At least he is soild in Mentality not as bad as a Arnautovic.

Fine with your suggestions. Others views are always welcome.

In Liga Total! Cup, he also impress me by his speed and changed a bit my view from him. Others values now are easier to compare as now we have a more accurate BL with new standards so comparisons with ladders are better. Updated.
...U dared to enter my world...

Watching him several times this summer in training sessions and some games. Most easygoing and aggressive (positive!) player i´ve seen for long time.

To Greuther Fürth: http://www.greuther-fuerth.de/aktuell/aktuelle-news/news-detail/article/fuerth-holt-niclas-fuellkrug-auf-leihbasis.html
The intelligent people are full of doubts while the stupid ones are full of confidence.
Top

Ok, this guy needs a total rework because hs is so much better than this. He scored 16 goals last season between Bundesliga and DFB cup and in current season only 3 goals, He had injury problems also, but overall this guy is really imporant to Hannover.

Responsive to rebounds and passesa, smart movements in the box. Also some good examples of nice SP, ST Jump and Header.

So in my eyes this guy needs a value above 80 in ATT, he is really important to Hannover, know how to move in the box and besides not being a great goalscorer, he is dangerous. Also he is kinda slow with the ball on his feet, maybe Ds should drop to 72-73. SA, SP and ST to : 78-83-82/83. Jump and Header both on 82/83. Technique to 79-80. This guy has a decent control and nice traps.Response to 83-84 and Aggression to 85. He also scored some free kicks while playing in Nurnberg, maybe a raise to 70 in fka and curling. Also add Penalties* as Special Ability. Remove other positions and only leave CF

Also this video shows more examples to support my suggestions and values.

Finnaly, he needs to be moved to Hannover.
Better to die quick, fighting on your feet, than to live forever, begging on your knees!
Top

With him joining Bremen, guess Florian Kohfeldt would change the system and will start using a CF from the beggining. Last season he played with 2 SS or WF (Rashica or Kruse) and in the 2nd half, Sahin was subbed by Pizarro and the system changed so Claudio can perform as CF.

Füllkrug is a good striker, he had some injury problems last season, thats why he couldnt play much with Hannover. in the 17/18 season he scored 16 goals and looked very impressive, lets see if he shows his qualities again in Werder Bremen.
Better to die quick, fighting on your feet, than to live forever, begging on your knees!
Top

He was having good performances at the beggining of the season and then he got injuried again. This week, he started training again with the first team. If he could play the last 4 games of the season, Werder Bremen would benefit a lot, they really need him. At this point, any player who can offer something interesting is a good option for them.
Better to die quick, fighting on your feet, than to live forever, begging on your knees!
Top

After 9 months without playing due to an awful injury, he came back and scored a goal today against Paderborn. I really hope this motivates him to carry Bremen's attack from now on.
Better to die quick, fighting on your feet, than to live forever, begging on your knees!
Top
Post Reply
10 posts • Page 1 of 1