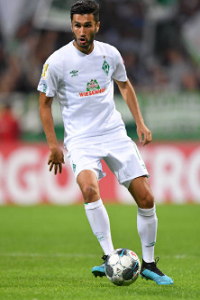 this current stamina and TW doesn't look realistic. he is no way a 87 stamina now . also he really moves little to warrant such high TW value. for example joe allen is thousands times better in his movements and much supportive than him . and he doesn't showed any thing to warrant talisman card. that's not his style so far.
vamos arriba la celeste !
Top

The guy has played two games, and you judge him?
Top

Way too early to make any changes. I still think Allen should have 86 for TW.
Top

its not any judgement . its just my observation so far .if it was my judgement i would through some values here .

its just what he is showing now doesn't look any close to this current value( dortmund days ??) . also whenever i saw him he never struck me as talisman tbh. he doesn't carry the team on his own from the mid-field. what i saw that konami gives talisman cards to those players who are great at dribbling and moving from the mid-field to flow the team forward. is that his nature ? he is more of a play-maker who depends on depth touches and passes. more of deep lying play-maker types.now it can't be that he has changed his style over-night. but if that card should be gone.
vamos arriba la celeste !
Top

tasmin, I suggest you go watch some Dortmund games before posting in this thread. Your lack of knowledge about the player is blatantly obvious.
Why would you want to lower his stats if he's barely played since his injury in the first place?
He's the same type of player that Redondo and Guardiola were. Pirlo probably comes the closest of any contemporary players.
Sahin is much better defensively than him, though. Even if the stats seem to tell you otherwise.
Why should he not have the Talisman card? He was crucial in a very strong Dortmund side in 2009/10 and even more so in 2010/11.
He and Bender bum-raped the midfield of every Bundesliga team.
Top

Antihero i Understand that we admire some players sometimes, but insulting is not allowed nor necessary, and insulting tasmin's even worse, he's a respected member of this website, so please don't mess with him mate.
Du wirst nie alleine gehen, ies ist Anfield
Top

@tasmin, you can't expect a guy whos basically not played in a year to jump right in and be back at 100%. I also really wonder how he will adapt his game, havn't seen his latest match, but going by his first match he was so average, a shadow of himself. Even still in that form, he could lose a lot of his playstyle but still be a massive benefit to any team through his passing alone. Going on his dortmund days his def and tw are actually under-rated, but it remains to be seen whether he can return to his former all-round brilliance.
Top

but he's a liverpool player, he must perform from day one
Top

in Liverpool FC so far:

He played like holding middle fielder last night . When Lucas returns , Sahin will be given the opportunity to attack and support the atacking players .
I have accepted Allah as my Lord, and Islam as a way of life, and Muhammad may Allah's peace & plessings be upon him as a Prophet and Messenger of Allah.
Top

another awful game against everton.he offers absolutely nothing today.after 20/30 minutes its tough to find him in the match, average in defending and holding the ball,probably the speed of the epl is harming his capability.most significant is he is not attacking the ball and not moving forward as much as he should.poor support up front.
vamos arriba la celeste !
Top

Is it just me or has he been awful since joining Liverpool?
People gon' be people. They gon' lie, they gon' cheat, they gon' steal, but as long you get yours, you keep it moving.
Top

CR7 wrote:Is it just me or has he been awful since joining Liverpool?

Just you. He was awful for Madrid too.

i think he is a bit like lewandowski. a player who greatly fits in dortmund system but otherwise he is very average.
vamos arriba la celeste !
Top

We will see with time. He only displayed that he had great passing skills and was a good set piece taker, but zero confidence to try It often :S

Hes far from average, hes not being used well by rodgers. When it comes down to it, passing is his strenght.. long passing.. and it's like hes been told not to do them or something? He never uses them, it makes no sense, thats what defines him as a player so I just can't understand it. He used to do like 7 crazy aerial passes a game, now he does none?
Top
Post Reply
261 posts