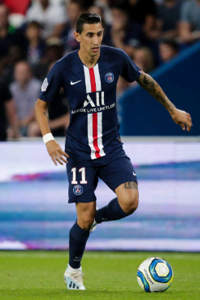 I don't know when PES2016 skill cards and stats will be implemented, but the new Rabona card is a must-have for him.
Everyone knew it was impossible. Then came along a fool who didn't know it, and he did it.
Top

Don't forget Malicia, that one is also a must for him.
Top

IMO LPA can go up to 94
SPA to 87-88 .
From the world of darkness I did loose demons and devils in the power of scorpions to torment.
Top

It's not because he does short passes that much, but He has a great vision, and for me he is at 94 LPA, to be at 94 LPA and to have a mid yellows SPA rating for me sounds ridiculous .
From the world of darkness I did loose demons and devils in the power of scorpions to torment.
Top

2headedEagle wrote:to be at 94 LPA and to have a mid yellows SPA rating for me sounds ridiculous.

Would you mind if you explained us what makes it ridiculous?
"Willy Wanda is Chinese!!!"
Top

He has great vision but vision and passing accuracy are different things. It's true that is LPA is crazy and could be on 94, but when he's in a situation where a short pass is the answer, his decision making is a bit worse. 85 is a perfect value for his SPA IMO, it makes his passing consistent without making it lethal most of the time.
Everyone knew it was impossible. Then came along a fool who didn't know it, and he did it.
Top

Sick long ball passer, 94 or even 95. Today he played 30 minutes and gave 2 great long through passes to Cavani let him 1 on 1 against the keeper, some good grounded pass from him too. Imo best long passer after Messi and with maybe Verratti (except the old lads: Pirlo, Xabi, Totti).
He's even the second best through baller in this season after Messi. (Opta). The Dimaria Cavani connection is exceptional.
Top

He seems faster than 87 for me.. Oh and totally agree with an increase of his LPA
Top

I don't see any reason not to give him that increase in lpa, I think when he was in spain we were all pretty much in agreement that he was bordering, if not on red already.
Top

I'd lower his BB though, he really isn't into physical duels and I don't see why he his rated higher than Neymar for example. I'd also give him something in the range of 87-89 for BC, his trapping skills are consistent but nothing exceptional.
Everyone knew it was impossible. Then came along a fool who didn't know it, and he did it.
Top

His TS should be higher than this, 89 would be a perfect number for him. The only reason I see for his TS be only 87 is because of his red DS... but then a lot of players should be downgraded too (CR7 88 DS 93 TS, Robben 96 DS 93 TS). 89 TS for me. Also Form could be 5 now, he's pretty consistent with PSG. It's true that he's in the best team in the league by a mile and they don't have anything close to a rival there, so maybe we should wait for CL.
Agree with the BB downgrade, no idea why he was upgraded to greens (he was in the white zone months ago).
Top

I think he needs Rabona.
Top

Scoring-wise he's having his best season ever... don't know if he deserves higher SA or ATT, his shooting skills aren't THAT good, and he has a really good number in ATT for a winger. Of course, then I search around here and I found Bale on 87 ATT and really don't know how the hell is he rated so high, comparing them Di Maria should be at 85 then.
I insist with lower BB and higher TS, like many people pointed out like a million times already.
I was going to suggest higher Form because he's doing really well at PSG, but with his current values he's a freaking monster in game... he would be even better with higher TS and LPA (94 seems fair to me), so I wouldn't go beyond 5.
Top

Agree with most of what was said. ATT is up (85 to me), LPA up (not reds, but 94 alright) SA also don't know, but not yellows, as far as i can see (maybe the difference relies on ST), RES seems higher but i don't have a exact value (not so much higher) and form is 5 for now...
Top

Something I can't believe no one noticed yet: why is his DEF/STA combo so high? The only season in which he defend (or at least tried, because he's an awful tackler) was his last season at Madrid. Even then his DEF looked huge at 60, considering that a winger like Ribery, who helps a lot more than Di Maria and also is a better tackler is at 58. Di Maria couldn't be above 56 (that's the best I'd give him, could be much lower) in his classic set.
Since he left Madrid, he didn't help at all defensively. Not at United, not at PSG and much less at NT. I don't want to bring up the ladder argument, but right now Cavani and Rooney are both at 58 DEF, Muller at 55... the three of them are way, WAY better than Di Maria regarding tackling and defensive contributtion. Damn, even Neymar looked better than Di maria this last season. Considering all that, 52 is the max i'll give him right now. Could be much, much lower.
Also his STA should go down to 86. He didn't defend anymore so there's no reason to have him in such a high value if he's not going to use it. Same case as Bale (even Bale defends more than him nowdays). 86-85 max.
And, of course, my previous suggestions: white BB, 89 TS and IT C.
Top

Agree on Def,Sta and BB,his role is much more free in PSG,since he has players to back him up definitively,both Kurzawa or Auier and Dmfs ,his BB is an obvious one honestly,he almost always goes down when opponents try to contain him,he evades them but can't hold on to his feet,his Ment could be even a little lower as well.
Top

I don't know if you guys follow him at NT, but he's so damn stupid to play. He's not smart at all...he takes the ball and tries to dribble everywhere anymoment and he doesn't give a pass even if he's surrounded by 4 players...he'll try to dribble between them. He's not useful at all since WC, I don't know if he tries to prove that he's as important as Messi at NT or he's only a brainless player to think how to attack and choice a good option. The thing is, he's so agile and talented that sometimes he's succesful. But let's say: he takes 10 balls and he loses 9 of them. Probably it's time to bench him at NT cause he's absolutely garbage since a while.
Top
Post Reply
1032 posts