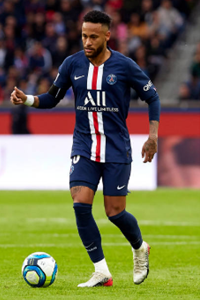 Kinda hard to say since we've saw just a little of what is capable of.... I would rise his DA to 81~83 ( it's his main asset really), lower his Shot power to 70 and distribute those 6 points into shot accuracy and technique, so he would get 75 on both... His shot is very weak atm, he always goes for placed shots. I believe that we will raise his passing stats and technique soon as well, but let's wait and see.
Top

EDIT: he plays in both sides

Isn't he played just 1 or 2 games as professional? Don't think this is enough to rate him well.
Top

scored in a big match against palmeiras

i would agree with an increase in DA,not sure about how much,ill have to watch him more
Top

He is MUCH faster than this.
Top

I agree with Paddy that his Speed stats are underrated. I'll try to make some suggestions in a few days.

SPEED STATS: His Speed/Acceleration seems to be some of his great qualities, along with his dribbling skills. Have a style of running similar to Robinho, great speed, burn acceleration.
DRIBBLING STATS: Agility as first post, but Dribble Accuracy deserves an adjust. He has the ball close at his feet even at high speeds, I think we can rate on pair with Nilmar. A small update on Dribble Speed too, he don't lose any speed with the ball.
PASSING STATS: A small boost in passing stats, he made some crosses and his pass are pretty accurate.
AGGRESSION STAT: Above yellow's? We are crazy!
Top

This stats is old, i make this based on 2 or 3 games

agree with pedala stats with rafzin suggestions, except TS and ACC

I gave him a small update, based in the last discussions.
Top

Probably, he play in same position as messi play in barça, like a WF or SS. Suggest: WF, SS, AMF, SMF
Top

He gained 7kgs, he's weighting 61kg now. Probably soon he will get another update, as he's making a work with nutritionists to gain muscles.
Top

He will be higher than Robinho in next years.
Top

You mean better or...
Top