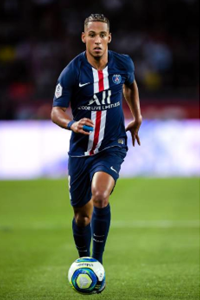 A lot of mistakes for his first games. Lot of fouls, bad placement and too much agressive with his tackles too. Well it was just a first game with 3CB anyway.
They have eyes but cannot see; they have ears, but cannot hear; they have tongues, but cannot speak. They are like cattle.
Top

I'm pretty sure this guy is completely two-footed, WFA might be 8.
Everyone knew it was impossible. Then came along a fool who didn't know it, and he did it.
Top

Again a very bad performance last night, his season been terrible, he's involve in so much goals against PSG. Way too weak defensivly.
They have eyes but cannot see; they have ears, but cannot hear; they have tongues, but cannot speak. They are like cattle.
Top

There is no way this guy has yellow defence and balance. No way.
The timing of his interventions, his positioning, is atrocious.

- He conceded 4 penalties against his team this season so far. This is a record in France and i wonder if it's one in the main european championships, too. He's the one who conceded the crucial penalty against Guingamp that eliminated PSG from the Coupe de la Ligue.
- He make costly mistakes that directly lead to goals against his team. Against Manchester, against Nantes, against Marseille, against Monaco... With Kehrer on the field, Paris concedes one goal every 88 minutes, without him; One goal every 180 minutes.
- 4.7 balls lost per game on average, 60 % duels won, very poor stats for a center back. (https://www.lequipe.fr/Football/Actuali ... er/1010442)

About his balance, he's outmuscled quite easily, even losing physical duels against Valère Germain. He also often slips and fall to the ground when the opponent performs a brutal change of direction. Happened in Bundesliga too.

Kehrer is to defensive proficiency what Morata is to shooting accuracy. There is no way he's above 74 on that aspect. When it comes to balance, he's somewhere on the green-tier.
Top

I actually downgraded his DEF a few fays ago, probably forgot to save.

I wouldn't touch his balance though, 80 isn't a crazy number especially for a CB, he doesn't seem overly weak to me and his overall physical prowess is the only strength of his that saves him from being a total disaster.
Everyone knew it was impossible. Then came along a fool who didn't know it, and he did it.
Top
Post Reply
6 posts • Page 1 of 1