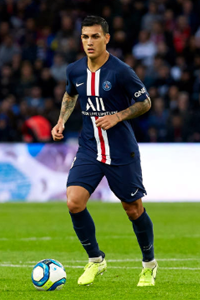 I was rthinking for quite some long time that he needs to have a good Nerf in his RES stat, he is just too much passive and uninterested for a player with that RES (same as modric), while he is quite combative sometimes his overall behavious does not justify that value so i think that his RES needs to be dropped to whites to reflect that.
Besides that i think his curve should be at that 88 value i have given before and his LPA/LPS/SP are probably needed some small upgrades that he will eventually show in PSG, i think his acc at 80 was really fine for the times he actually runned and accelered to go for tackling. 1-touch pass + tactical dribble are Stars to be considered.
For new gen id say keep his Defensive Prowess low, and just give him a high value for Ball Winning, id say 85, already stated before that his tackling is high quality and he deserves that *sliding and something in old gen to represent his high tackling level.
Top

I've been rating BW as Def more or less for years now so a player in the 60s meriting 85 BW doesn't really make sense to me.

That aside, I had visited Paredes 6 months ago as a suggestion from Elivelton, basically going through vs vids and comps. I had seen the merit of a higher curl value as well, maybe not quite 88 but higher. His LPS and SP had also looked really excellent to me, i had seen both at 88 at the time with the promise of something higher potentially. At the same time i wasn't as impressed with his DA and Tech and considered him to be at a lower tier than the current set, tech in particular.
Top

I can't understand why they burn 45M€ for him this winter. At least his first 6 months aren't really good. He doesn't seems to fit to PSG. But let's see after an entire preparation with PSG this summer.
They have eyes but cannot see; they have ears, but cannot hear; they have tongues, but cannot speak. They are like cattle.
Top

Adrien, PSG needed a DMF since they found themselves in a spot where they only had two real midfielders in their squad in January. Signing someone was absolutely necessary.

He deserves a raise on his short pass accuracy. 86-87 would be more adequate.
On the other hand, his defensive positioning and overall ball winning skills are pretty bad. Don't know if decreasing them even further is adequate since his current def & ball winning value are already low.
Top

Set looks good. Yes, possibly some upgrade on his SPA. Wouldn't go as high as Kim, he made some shocking mistakes.

Splendid SP, to keep an eye on. Won't be able to judge him well this season, has to be given a bit more time to adapt to the league. Most PSG fans already mad at the buy. Does seem expensive based on what he showed.
Top

This guy is so far from being a good player honestly, except for the talent he lacks literally everything. I was analysing the game of Argentina vs Colombia few weeks ago, and altough it's nothing new about him, he was so bad, especially in terms of quality supporting movement in the build up. That 72 TW is spot on, altough he seems sometimes even worse in that aspect. He maybe improved his game later in the tournament, but again when i watched the match against Brazil he was once again very bad. His selection in tournament's best 11 is shocking. I am also quite sure that he is too sloppy and error prone in terms of long passing to be at 87.
Top

Could you elaborate a bit more? Saying he was bad imho is wrong, he was the best player at NT...he stole a lot of balls playing dmf even without being a destroyer and playing alone there just to make the balance in the midfield.

Also his passing was quite good, strong, looking for Messi and his distribution at his long balls was quite decent. I don't really know what you do expect from him but imho he had a good tournament.

Just to say, yes, you just watched the game vs Colombia and Argentina was a total mess...with a midfield without any kind of sense and Paredes very umconfortable with two very slow players near him.

When Scaloni played De Paul-Paredes-Acuña he improved a lot cause he was more covered and he had two fast players to accompany him and back behind the ball when the team lost the ball. Imho he had quite a good tournament and he claimed for a starter place at NT, one of the few.
Top

Defence: 62? I think it's too low. Not as good as Veratti or Jorginho, but he needs to get increase. He made some good decisions in his last game against Saint-Etienne.
Update it to 68, it will be fair enough for him.
Top

Really Paredes deserves a so low team work value? It's so strange for a kind of player like he is (and for his level too)
Top

Great ST/SP there.
Everyone knew it was impossible. Then came along a fool who didn't know it, and he did it.
Top
Post Reply
90 posts