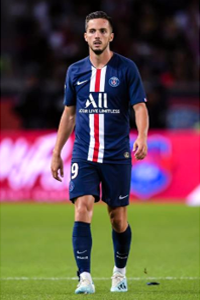 I think it is better to teach what he does in a game, instead of a collection, there are still more games out there, but do not get, it would be too


It has great ball skills with his left leg. This is a fast player one-on-one, with great shooting from different distances with both legs. He began the 2008/2009 season in the Junior A ranks of Real Madrid, playing occasionally in Real Madrid Castilla.

Sarabia and Morata enter the Real Madrid, or at least in the squad for the match of the day 08/12/2010

Hope he plays today. I can't wait to see him.

After its debut, in an interview said this:

"We are working to get minutes, both my colleagues and me, and me the day has come to me. You feel a special feeling and you see all the people supporting and I am delighted," said Madrid playmaker told Telemadrid.

"When you enter the field just what you like, which is play football, try things and do well. But we must start with humility because my team is the Castilla" Sarabia said he is glad " Benzema much. " "He has left a very complete game,"

Pablo Sarabia in his debut against Auxerre ... The boy's number is 33

Cut Back Pass? He constantly runs up to the back-line and tries to put it in front of goal with a pass across the 6-yard box.
Buon compleanno, il pibe d'oro.
Top

Ajacied_Breda1 wrote:Cut Back Pass? He constantly runs up to the back-line and tries to put it in front of goal with a pass across the 6-yard box.

I've putted all the videos inside the spoiler code, to don't have such long post.

Xyder wrote:I've putted all the videos inside the spoiler code, to don't have such long post.

His long passing Is really underrated imo. Plus lately he's been acting as AMF mainly If I'm not mistaken.

yep kinda of LMF/AMF at times, btw Att should be green on my eyes showed some nice movements upfront

, I also think he is underrated on much others areas but I get why considering he played until last season @ 3rd division

The whole seems quite underrated, specially in dribbling, agility and overall passing (both short and long), but to be honest I haven't seen enough displays of him to provide reliable suggestions.

Was a boss against Estonia.
Top

Weren't they all? He was on everything, even tough he was a bit childish on short passing (Weak, not that good). He shown his good crossing again, nice dribbling and speed... I always thought he wasn't a good shooter at all tough. But well yeah, he's young

Fixer wrote:Weren't they all? He was on everything, even tough he was a bit childish on short passing (Weak, not that good). He shown his good crossing again, nice dribbling and speed... I always thought he wasn't a good shooter at all tough. But well yeah, he's young

Compared to Cuenca, IMO Sarabia is a better passer and TW player than FCB's WF. He's skilled too, Cuenca abuses more of trickery and Sarabia looks more effective.
He played nice against Switzerland too, he needs some changes, I've got some on mind but I need more time to test and to post

Some general thoughts, nothing definitive, would like to hear your opinions guys:

Attack: 73 -> 74 (a bit better than 73 IMO, although not enough to deserve greens yet, he still needs to improve a lot in terms of positioning, offensive movements and game-reading).
Defence: 33 -> 38 (some standarization here)
Balance is ok.
Stamina: 77 -> 80 (he moves a lot around the pitch, sometimes even switching sides, and usually keeps an aggresive and attacking style of play throughout all the match, well that's impossible in PES 2011 with STA 77, he'll get depleted by minute 50 or so, I think 80 is fairer).
Speed stats seem ok to me, the thing where he's actually pretty good is at dribble speed, but in terms of TS/Acc the set is ok... needs to gain more muscle I think).
Response: 75 -> 76 (a slight increase, he's a bit slow in terms of reactions though, should improve quickly at this).
Agility: 82 -> 87 (his main asset, I'd say he's even more agile than Cuenca, the quickness of his movements is impressive, his dribbling and changes of direction seem very fluid, in fact -as oppossed to Cuenca- his dribbling is actually more based on fast changes of direction, taking advantage of his small size to fool bigger defenders).
Dribble Accuracy: 78 -> 81 (easily into low yellows, but don't want to overrate him here, his dribbling is still a bit mature and inconsistant).
Dribble Speed: 82 -> 85 (another of his main assets, his speed with the ball is pretty good considering he isn't extremely fast without it).
Short Pass Accuracy: 73 -> 76 (SPA deserves clearly a low green IMO, he's indeed capable of very good passes and could merit more if not were for his inconsistancy, will get better at this for sure)
Short Pass Speed: 72 -> 74 (this one, however, can sit on a white, his passes still lack a bit of strenght, the long ones too)
Long Pass Accuracy: 72 -> 77 (his crossing is actually pretty good, I'd rate it one point higher than short passes, but...)
Long Pass Speed: 72 -> 75 (... lacks a bit of strength, he usually needs to approach the area in order to deliver it quick enough, has improved recently but still has a long way to go here).
Shot stats I'd leave them as they are.
Free Kick Accuracy: 75 -> 74 (don't think he should have a green here, it's more cosmetical than anything else, if he suddenly starts to score FK then I wouldn't oppose an increase, but for now a high white should be enough).
Curling: 74 -> 79 (one of his main weapons in terms of passing, specially the long ones, he's able to give them an excellent curve, take his assist for the first goal against Switzerland -playing for the NT- as an example, placement is pretty good but what really gets the ball past the defense and directly to the head of the striker -Juanmi, who almost doesn't have to jump- his his Curling).
Header & Jump seem ok, however could drop them both by a point or so.
Technique: 80 -> 83 (same level as Cuenca, one point behind Jesé, his ball control is very good, specially when receiving long balls, he just "tames" them with one single touch, some of his controls against that Switzerland match are just impressive for a player of his age).
Aggression: 77 (I don't know if he really needs an update here, for a young WF he's not as aggresive as one could initially think, personally would leave him at this value for the time being).
Mentality: 73 -> 78 (knows to put up a fight when contending for a ball, pressures rival defenders when he loses it, sometimes helps midfielders with pressing and defensive tasks, and isn't afraid of enemy tackles - even when they usually end up with him on the ground... a high green IMO, good number for a 19-yeared-old).
Teamwork: 74 -> 78 (for a winger like him, he associates a lot with his teanmates, usually only goes for the dribble when he's out of safe options for passing, when he does his incisive runs he actually looks for teanmates and tries to build-up lay rather than trying mazing runs. Easily one point over Cuenca... he could even sit on 79 IMO, but still unsure about it, needs more testing).