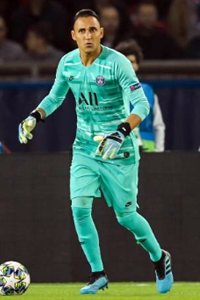 He basically never holds the ball. He's a very decent goalkeeper, his reflexes do most of the job, but he causes to much trouble by not grabbing well. I would even go on to say that his GKS could go down a bit...
Top

Could see a RED here, instead no foul called
https://streamable.com/3c5zz

Again has no fingers just clubs/stumps for hands (like vs BVB when he punched instead of cacthing)
https://www.youtube.com/watch?v=bkocULCgh0k

He's been bloody irregular this season, which is in heavy contrast with how consistent he had been in previous seasons. I've dropped Form to 4.

i'd suggest something along these lines for his new keeper stats.
Catching: 80
Clearing: 87
Reflexes: 93
Coverage: 87
Top

May not have spectacular saves, but has often been the support of Madrid in decisive matches.

A spectacular response, and feline leap
But an increase in his defense and GKS could be more in line with his present in Madrid,

His only disadvantage is his stature but otherwise he is a great goalkeeper
"No soy el mejor del mundo, pero creo que no hay nadie mejor que yo"
Jose Mourinho
Top

This bump for the thread has reminded me of something i've wanted to bring up about Navas this season. Keylor's reflexxes are still outstanding, and he has indeed been a big part of both of Madrid's back to back CL's, but i think this season Keylor has been quite erratic and sloppy with his goalkeeping skills. Very simple shots are poorly handled, and Keylor moves more awkwardly to difficult shots. There are still impressive moments where Keylor stops very very difficultly placed shots, but his typical performance is lower than in the past for his goalkeeping skills.

Keylor's positioning, and his sense for defending the goal is also still a bit all over the place, and he's not the type of goalie i believe will sustain an elite defence rating, but perhaps the best way to rate Keylor at the moment is to bump Defence higher, while dropping GKS to 83 or lower. I'm not sure about how low GKS should be or how high Defence should be- what he's shown isn't what i would like to rate as a high Defence Goalkeeper, but he has been very effective in various situations which show a remarkable difficulty in beating Keylor in various shooting positions that isn't due only to his reflexes. Take that Messi chip shot from 2015-2016, the way he responded to that shot wasn't great skill, but it showed how Keylor read that shot instantly, despite what a well placed and unexpected chip it was. I think alot of great goalkeepers would have struggled with that shot, even goalkeepers with great reflexes, and that moment stuck in my mind.


I'm really not so sure about how to best rate Keylor- to rate him for the last two seasons (i guess 2015-16 in particular as 2017 was a bit off for Keylor) i can see the sense in giving him values a bit higher than what i think his long term abilities are around just to capture the types of performances he consistently made in this past historic period, but on the other hand, looking at what level he typically performs at, and specifcally the glaring errors he makes in both goalkeeping and positioning, i think the current set is ok, and i even see ways to downgrade Keylor in some areas.


The only attribute that is a constant beside Keylor's reflexes (anyone notice this save from the allstar match a week ago?: https://streamable.com/4a036) and jump, is one of Keylor's most impressive attributes: his mental strength and fortitude- he is a dependable last line of defence because he isn't fazed by when he makes errors or he doesn't wilt in high pressure situations, he performs at the same level, and takes responsibility with resilience and a visible determination. I feel like a higher Mentality rating is deserved- though how high i am not sure exactly.
If you don't put effort into your post, i won't put effort in my response.
Top

I still consider the current set pretty much spot on. Only thing I did a few months ago was downgrading Form to 4. To me he's the same as a couple years ago... the only difference (and a significant one, yes) is how regular and consistent he was back then, which is something he's lost.

Slightly higher Ment is something I could live with, Keylor does usually shine when it really matters.

I also think he deserves an increase in his defense, he does not have good shot handling and more if they are distant and powerful shots, but his sense of defense is good, I do not feel that he is a TOP goalkeeper, but his performance has been efficient when The equipment required him.
And their mentality is enormous, it restores to difficulties both inside the field and outside.

Coming back into this thread, reading vinnie's post again, and ending up agreeing with him over the feelings I've been having for the whole season.

Updated, and gonna add this set to the database as 2016-18. There are certainly a few differences between the Levante and early Madrid era (perhaps a safer and specially much more consistent, Form 7-like keeper) and the Keylor of these last years, a bit more inconsistent and with more glaring errors but also a man who clearly raises his game when it most matters. Yesterday he provided another really great save in a crucial moment.

double save vs Getafe
Top

I find myself agreeing with Konami's set in regards to his body control, they rate him on 70 since the stat was created for PES17. He has a decent control of his body combined with his agility to get off the ground fast which enables him to make some good double saves.
Top

He's better than this. His GKS are super duper low.
Top

His handling is probably the worst aspect of his GK skillset (not based on this match I mean), what he's absolutely insane at is reflexes, positioning and diving. GKS might be higher but I wouldn't go past 85 really.
Everyone knew it was impossible. Then came along a fool who didn't know it, and he did it.
Top

With the new stats I'd push up his GKS and would drop his catching. He does bobble the ball.
Top
Post Reply
95 posts