I have some amazing literature on Torino from lo zio from Evo-Web, in response to my question regarding their current formation:

jmg721 wrote:First off is their backline. I really don't know if or how injured Diana is, but he NEEDS to be their RB. I saw them try to move him to LMF and Colombo to RB, and it was a disaster. Currently, Diana is out of the line-up and instead of having RB-Diana, CB-Di Loreto, CB-Natali, LB-Pisano like they were playing earlier in the season. Now I feel they are playing just about everyone out of position. RB-Di Loreto, CB-Natali, CB-Pisano, LB-Ogbonna. I thought Ogbonna was a natural(yet unseasoned) CB, and pisano is a natural attacking LB. Di Loreto looks really poor in space, and he is a decent CB. The most surprising thing to me is that Pisano has not looked bad at CB. His positional sense and quickness seem to make up for his lack of stature. I think it was a good idea to stop playing Pratali though. I don't think Dellafiore is the answer either.

He broke down each player, which I will post in the players threads, and then he discussed 2 possible formation in which they would be more successful.

lo zio wrote:3-5-2 display (napoli-like), with amoruso and bianchi upfront, and about a 3-4-3 display (udinese-like) with amoruso upfront, rosina and abate moving around him.... and of course dzemaili-barone at midfield (with no zanetti)

lo zio wrote:and that's why i think it might be good for novellino to try a 3-5-2, like napoli's one. a 3 cbs set up (pisano-natali-ogbonna, maybe) with diana on the right and rubin on the left, both lined up 10 about meters ahead of the defensive line.
with this set up torino might get a better coverage of the box (with the 3-5-2 the cbs are much closer each others than with the classic 4-4-2). one of the cbs could (sometimes) detach himself from the line, pushing foward, pressing the ball carrier, with the others 2 staying deep on coverage.
and moreover this way, diana and rubin would be freed from the tipycal coverage duties of a proper fullback and could help the midfield keeping the possession line higher....
the thing is novellino (wich is a good coach i respect a lot) is very, very faithful to his 4-4-2 interpretation.
and that's a shame to me, as i believe that with this line up diana and rubin could create a great partnership with abate and rosina (their overlaps could be damn effective as both rosina and abate like to cut on the centre).

and novellino also has the midfield to support such a system. barone and zanetti providing some hard work just behind the midfield line, and dzemaili (i've been impressed by this guy too, Jmg) lined up between those 2 guys, just a couple of meters ahead. and they would also have 1 good backup for each of them (samuel, vailatti and corini).

then there's the offensive set up. that's where torino has more options.
having amoruso and bianchi, novellino could choose every possible set up. bianchi and amoruso formed an amazing partnership in reggina... they just complete each others.... but unfortunately, since bianchi came back from his english experience, he doesn't seem the same (great) striker anymore....i'm still confident in his qualities though.
novellino could choose a 2 fowards system as those 2 guys could easily take care of the offensive phase just by themselves. this set up would be perfect for his 4-4-2. but that should imply a less mobile and pushing defensive line, especially on the flanks (wich would mean another rb instead of diana who is too offensive for this system, and that would be a shame). moreover this offensive set up would be "hungry of crosses", so no room for rosina (diana playing as right midfielder would be a better option as, unlike rosina, diana wouldn't cut on the centre and would provide all those crosses amoruso and bianchi need). no problem for abate, who would suit every possible formation imo (abate has a bright future!).

or maybe (and that would be my favourite option), novellino could display amoruso (or bianchi) as a lone foward with abate and rosina rambling around him. this offensive set up would suit perfectly the 3-5-2 system i was talking about before.... it could be like this.

But it's obvious what he meant with the 3-5-2 & 3-4-3. Not sure who would be the 3 midfielders in a 3-5-2. He has dzemaili/Barone & Zanetti. But possibly it would be Rosina in Dzemaili's spot, and Dzemaili in Zanetti's spot?

Not suggesting I change the 1st post, but I appreciated his thoughts, so I thought I'd share them with you

A lot has changed from the transfer period. They lost Amoruso(their best forward), and gained Dellafiore who is playing well in defense since his arrival. They also got Gasparoni, but he hasn't seen much playing time.

Suciu debuted for Torino against Rome

that's because Torino had 7 players banned 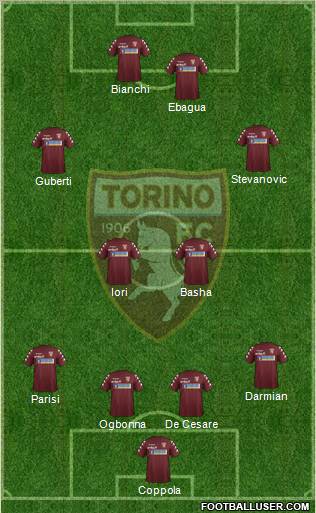 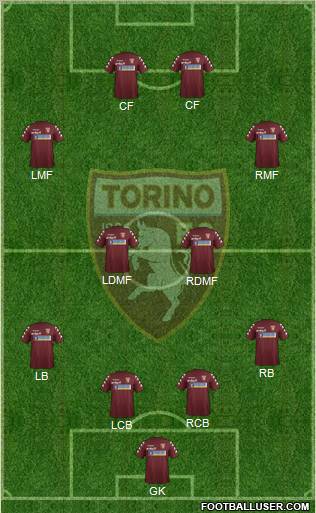 Sorry, D'Ambrosio is no longer on the team, you should update team tactics.
Top

Also El Kaddouri should be changed with Basha,he have played more than El Kaddouri ,at least in that position .
PMTP & Mia San Mia
Top

I think this is the formation now 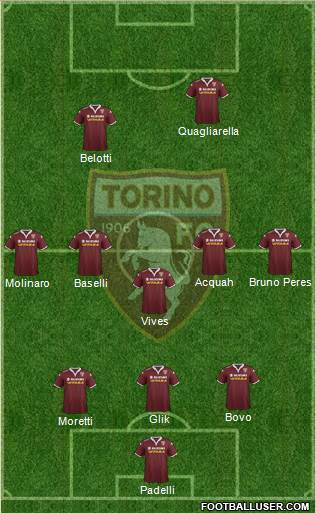