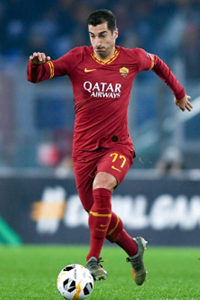 nice passing when he is under pressure, specially 1-touch skills. SPA easily 84-85
Top

Karbrüggen wrote:nice passing when he is under pressure, specially 1-touch skills. SPA easily 84-85

85 SPA is probably a bit much for him, I'd say 82-84. He is not really a safe passer, misses quite a few. In his defense, he always plays at high octane speed where it's tough to keep the accuracy. He is a dangerous & incisive passer though but I'd attribute that more to his ATT than his technical quality. He likes to dribble past 1 or 2 players and then exploit the chaos he just created by forcing defensive attention onto himself and away from teammates.

Clearly BVB's most dangerous attacking player. Plays a crucial role in most of their attacks. One of those few players you can give a free role and expect astonishing results because he just knows what he's doing. I'd go for ATT 88 & TW 87 and that's keeping it conservative as I can see especially ATT even higher.

AGI & LPA do seem a bit low here and I'd think about raising STA & MENT a little.
Incredible player who would/should start for any team in the world today. Love the aggression. Messi should watch some videos of Mkhi, could remind him of what he's missing out on by playing so relaxed..
Top

Dortmund hater but if he really has 23 goals ( 0 with penalties ) and 32 assists in 50 games this season , he surely deserves higher ATT IMO

Surely an orange DS, he's one of the fastest players on the ball currently.
Top

bitz wrote:Surely an orange DS, he's one of the fastest players on the ball currently.

Yeah, DS an orange(as you said), but Acceleration and Explosive Power should be on high-yellows and mid-yellows respectively, also. Generally, much quicker than what he is currently given, especially with the ball, throwing it forward and accelerate past opponents, for example his goals Vs Spurs and Vs Leicester(also, zig-zag dribbling is also part of his playing-style, like his goal vs Zorya).
On the other hand, Defence, Body Balance and Form are some of the most certain areas that need downgrade.
Defensively, not only nothing fantastic, but also not good enough defensive-wise for the position of Attacking-Midfield/Winger, and his work-rate in general has been questionable at times. Physically-wise, even though his good Stamina helps him keep running until the late stages of the match, in my eyes he is a soft-ish player in physical battles, and certainly much more soft than Alexis Sanchez, with whom he is currently sharing the same Body Balance value. What is more, his Form has been relatively inconsistent through-out the years. From brilliant in Shakhtar to struggling in Dortmund, then from world-class in Dortmund last Season to inconsistent so far for Manchester United. There is no doubt that he is a quality player, but especially this Season, his Form has been very inconsistent. At first, he struggled to be in Man United's match-day squads, let alone the starting-eleven, but just before the middle of the Season, a series of top performances mainly in less important matches(with the exception of maybe Spurs) lead to him being picked much more frequently nowadays, but you can still see the inconsistencies in his performances, for example from being average at best Vs Hull to being MOTM Vs Leicester in half a week. Once he starts performing well in big matches also, in addition to the less important matches, and prevent himself from taking-over something like "Ozil's big-game Syndrome", then he will be fine and a guaranteed starter for Manchester United.
Top

Mkhitaryan is a good player. Lot of stamina, pace, energy, technically good, nice pass. But i find him also very wild and incosistent in doing good things. I don't think he's having Ozil kind of issue, which is lack of desire, and just walking around. Just really bad decisions very often, there are some games where he's doing all wrong, being disspossesed, sloppy stupid passes, but at the end he scores a scorpion or give a really nice assist. That 85 ATT & TW 84, with those deserved speed and technical stats overpowers Mkhtaryan quite a lot.. Decreasing him there noticeably (ATT TW) would be a solid idea IMO. I understand he was brilliant in BVB, but German league is just.. Current BVB with super high line and stupid Bosz are being bullied in the UCL, still doing great. So those sick stats from Germany are brilliant, not every player could do that, but to be honest the hype about him back there was way too huge.
Relja's not dead
Top

One of the most overrated players both in the world and in database. These stats put him ridiculously close to some players who are different class.

I'll explain that in a bigger post ASAP.
Relja's not dead
Top

Yep, shadow of these stats,
Top 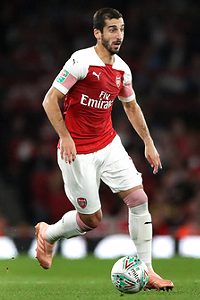 I've never really gotten the impression that his performances warrant such stats, either at United or Arsenal. I never got to see him in his prime at Dortmund (I feel most people would consider that his prime) but I'm guessing these stats are based at least somewhat on his time there? While I completely respect the work that's gone in to creating this set, I also feel an updated set based on his time at Arsenal would require a pretty drastic decrease to a lot of stats.

Starting with attack, I can't say I've ever observed him as being this dangerous, at least not consistently. Off the top of my head perhaps early last season at United, in the first 4/5 weeks of the Prem season he maintained a fairly high level of play throughout matches, contributing with goals and assists, but after that purple patch he pretty much faded into obscurity before becoming surplus to requirements. At Arsenal, I'd consider his attack to generally have been around the high 70s region, if that? Low 80s on a good day I'd imagine. He doesn't really exude 'threat' all that consistently, and in fact more and more nowadays I find myself frustrated with his poor decision making and the lack of 'bite' in his play. Sometimes he even looks devoid of ideas going forward. His passing can be shrewd and he can contribute well to attacking moves at times, but I do not see him as posing this much of a threat on his own.

With a stamina of 86 I would expect him to be able to press from the front, but so far I don't feel he's ever shown the engine or work rate necessary for such an endeavour. In my opinion he can even look lethargic at times. I would say low 80s in this respect but I feel I might be influenced somewhat by the perceived work rate that people have attributed to him in the past, suffice it to say I haven't really been impressed by him in this regard.

ts and acc wise, I've seen nothing to suggest that he is a veritable speed demon, which I feel is what these stats would represent. 88 acceleration suggests an impressive burst of pace that, at such a value, would be an important part of an attacking players repertoire, and I honestly don't feel as though mkhi does utilize his acc to that extent, or if he's capable of doing so at this point. I feel he still has a fairly good burst that allows him to create space at times and to take players on, but not anything overly impressive. I personally wouldn't go over 83, if that. I also consider him an acc > ts player, though I have no concrete suggestions with respect to his ts.

84 response is just... I don't even know, but I feel quite certain that he hasn't shown this level of alertness or willingness to respond to loose balls or movement off the ball as an 84 would suggest. Again I can offer no concrete suggestions, but I'll only say 84 is a fairly exceptional value and mkhi doesn't look like anything special in this regard.

He's nowhere near an 88 agility, he can show instances of being nimble and has fairly quick feet but his movements aren't so fluid as to be almost an orange value. Again I wouldn't go over an 82/83 value personally

His close control is possibly his greatest asset as a player I feel, and even then I think something along the lines of 84 or so would be more apt? Especially in combination with that 90 ds if the forum insists on keeping it, though personally I've never witnessed him maintain such speed on the ball

Can't say I've noticed his short passing as being this good, sure it can be good sometimes but 84 would be an impressive value for a player who mainly features out wide now, and I don't feel his passing is this good. It's good enough that he doesn't always seem out of place in our team, he rarely turns over possession, and he can play a final ball but not often. I would consider him more of a low 80s based on what I have seen so far.

technique, mentality and teamwork also look suspect in my view. I feel as though I've been extremely critical in dissecting a lot of these stats but I'd like to iterate that these values are based solely on his time so far at Arsenal, and it may just be that we've yet to see the best of him. I'd like that to be the case because I like mkhi a lot and I enjoy seeing players from lesser known footballing nations do well but genuinely, as it stands, with these stats he's exceptional and in my mind the strongest current Arsenal XI wouldn't feature Mkhi (which would be unthinkable if he were truly as these stats made him out to be)
Top