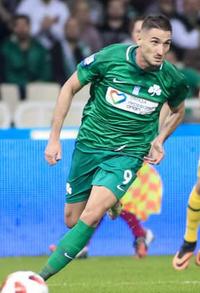 Spoiler: show
A powerful forward with a natural goalscorer's eye for goal, 'Kiko', as he is known to his team-mates, was born in Rome and was regarded as one of the most promising prospects of a generation in his homeland.

Tbh, there are a few things with these stats that could be discussed more I think. His ATT, TEC and RESPONSE are my main issues which I think are below what he deserves. Compared to Welbeck I think he's smarter in the box and his movement to lose the defenders is also more clever. He's not as proficient as Welbeck on the ball, but I feel his TEC is slightly low too. Response 75 could actually be upped by 3-4 points, IMO quite a lot better than Welbeck at anticipating moves and reacting to space in the opposing defence. I'd rather discuss this than throw out numbers just yet though. Thoughts?
Persona non grata
Top

He's also pretty darn close to being two footed, he should have 7 in both Weak Foot stats with his WFF possibly being on a 6.
Top

Aye, that's true. I know these are your stats, but are there other areas that you think could be discussed? What do you think about the areas I just mentioned? His understanding with his teammates is for instance a quality I appreciate about him, could his TW be slightly upped?

What about cards? He's no Messi, but he's got a few moves in his locker. However he's smart enough to know that doing too much might potentially harm his team as he might get tackled. IMO another reason why he's showing more maturity in his play than Welbeck.
Persona non grata
Top

The thing was Choccy, is that Kiko was so brobdingnagianly hyped after those two goals and everyone was in such a rush for his stats, Paddy perhaps had to be more scrupulous than he would've liked. There are certainly areas which could be tweaked, and I'm sure you and Paddy will come up with something.
"If you are first you are first. If you are second, you are nothing" - Bill Shankly.
"I guarantee fourth place" - Rafael Benitez.
Top

Vandeach wrote:The thing was Choccy, is that Kiko was so brobdingnagianly hyped after those two goals and everyone was in such a rush for his stats, Paddy perhaps had to be more scrupulous than he would've liked. There are certainly areas which could be tweaked, and I'm sure you and Paddy will come up with something.

I have no problem with that, and at the time I thought the stats worked well. My post wasn't meant as an attack on Paddy, I know he understand his Utd players, even if I only post occasionally I like to read what happens here.

I like to believe that Paddy and I can see eye to eye, I appreciate his extensive work here. My suggestions certainly aren't meant as a criticism on his work. Even if Macheda has been injured a lot, I honestly believe he's proved that he's a more mature player than say Welbeck in certain areas. He's no Dong, so he's bound to be updated sometime anyway?

Lastly, I like to agree on stats in consensus, just look at my stats for Mark Hughes in the classics. This is a player I've adored for years, I still managed to overdo/undervalue certain areas, a proper discussion between equals are always better. I might sound confrontational sometimes, but it's just my style. There's no offense intended, it's just so much more fun if you can mess with the lads you're talking to. Not so fun if it's taken personally though, so let me just make it clear it's never meant like that.

Having said that, I'd honestly like to continue discussing Macheda. I've seen a lot of young strikers come and go at Utd, but this one is something else. If he can keep himself grounded that is.
Persona non grata
Top

Thats certianly word of the year....

I know you mean there about the stats, I went way over the top on mine.....
Top

I'll drop my suggestion about changing his ATT for now as he's still just 18, but I stand by my evaluation of him being more clever than Welbeck in the final third (for the sake of age and ladder level being a point of discussion)

For now the two stats that I'd like to change are TEC and RES.

For a young lad he's got a very good 1st touch, he's more of an 80 here. This lands him along with Danny Webber (!), Frazier Campbell, Owen and Bellamy. I'm not about to argue about the ladders, but he's got a better 1st touch than both Webber and Campbell. Also, he's quite good at volleying, getting a clean connection which I've yet to see on both Campbell and the odd one from Bellamy. I don't know if Konami has changed this last aspect in later games, but TEC used to have an influence on volleying and 1st time shots.

I'm not as chategorical about his RES, but I see him as player who exploits space rather quickly and with a decent reaction to opportunities, 78/79 would be more in accordance to what he's shown.
Persona non grata
Top

although he's got so few chances with United first team but he performed as a super-sub..

last season's goal against Villa... this season against Chelsea and today's assist against Spurs...

he was in the starting XI when we played Blackburn and he didn't played well which showed his lack of xp but when he's brought as a sub, he's doing great!
Top

although he's got so few chances with United first team but he performed as a super-sub..

last season's goal against Villa... this season against Chelsea and today's assist against Spurs...

he was in the starting XI when we played Blackburn and he didn't played well which showed his lack of xp but when he's brought as a sub, he's doing great!

and against boro
Top

Don't remember him scoring against 'boro

could we focus on the card suggestion more than against whom he scored or he didn't?
thank you

If, as it seems, Super Sub Card is dedicated to who "prefer" to start from bench rather than 1st minute, if I can add my 2cent, I wanted to say that when last summer Macheda played with Italy U21 he played a couple of matches since 1st minute and he played bad. Ok, it was also because his attitude, plus all team played bad, but I want to think this can be useful for discussion.
Top

I believe that the super-sub card enhances player's abilities when he comes on as a substitue!
the player performs better when he's introduced to the match as a sub comparing to the same conditions if the player started from 1st minute!

Kiko from his short career at United proved he's playing pretty much better as a sub than when he starts playing from the begining!
Top

He scored up at Sunderland though

haha ya it was sunderland

These could arguably come under review, there're a few numbers of which I think could come up, as well as some down, does anyone have any suggestions first off?
Top