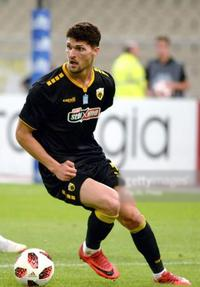 wrote: of the 4-5 most gifted newcomers to the league for talent but he has a few things about him that hold him back.

He's mainly a WF but can also play as a CF, an attacker rather than a midfielder. He's the detached type of player, moving little for the benefit of the team but he's responsive and mobile enough to become a target for his teammates' passes in advanced positions. His 1-1 dribbling combines control and quick wholesome turns and his 1-touch play is great as well and quick difficult one touch passes are a big part of his game, same goes for his technical skills overall. He's got great touches and he's shown glimpses of his versatility in both ground passing and good aiming with lofted passes. He is a genuine SA shooter that aims for corners in particular.

So why hasn't he been more of a highlight of his lackluster team ? For one thing, he's not a team player in any capacity. He doesn't move to provide support and on the ball he's either playing good one touches or attempts to dribble. While he's fluid and capable in both these aspects of his game he doesn't implement them in an efficient way to benefit his teammates or create space for them. Also while he seems capable of doing otherwise he mainly plays a close range game in both his passing and his runs which limits his impact on the game further as his teammates already have to move to him to bring him into the game.

He reminds me of Pardo in a way, in the sense that he should be achieving a lot more based on his skill but limits himself both with his playstyle and mentality. While he doesn't have the same concentration issues as the colombian he shares the selfish manner and narrow mindset to just go for personal glory, though in his case it's by only ''turning it on'' when he thinks the situation suits Him specifically instead of being a wasteful dribbler.

wrote:Great goal by Albanis. Tech, DA/Agi, SA all displayed. It's what he's capable of at his best, even scored the goal off balance.

stavrello7 wrote:He is the youth we can have atm. really talented

He is, his technical potential is far above the norm for greek players. I honestly think he could reach mid 80s plus status for DA/Tech within the next couple of years for one thing, that is if he's given the conditions of a proper team. I wonder where he'll end up, big 4 are usually quite oblivious to players' talents unless they are displayed right in their faces. Although, there have been some good scoutings from within the league in the last years. Albanis is Warda levels of talent, though some overall steps behind of where he was at his respective first seasons in Panetolikos.
Top

Great DA/Agi and incisive effort, resulted in the first goal

Third goal was a nice control and finish too

He is what Mirallas wishes he were currently