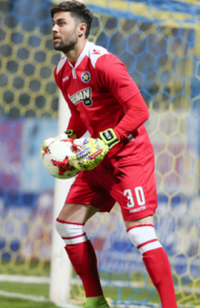 at the same game he put his team in danger because of his inability to defend off his goal, also giving away a dumb penalty

That 91 Responce isnt a bit crazy? Paschalakis has the best reflexes in the league

stavrello7 wrote:That 91 Responce isnt a bit crazy? Paschalakis has the best reflexes in the league

Well, Paschalakis has the best reflexes the same way Huanderson probably had the best reflexes. He is a responsive and very athletic keeper with a flashy style. But, as far as the speed of their reactions go Paschalakis is a whole tier below a few keepers we've had in the league, and what i consider the level response-only oriented keepers would need to be if they were to make it outside our little bubble here, where players actually know how to aim their shots and headers.

At the moment i place his Response behind Barkas and Athanasiadis and close to the same level as Kotnik and kapino in the 88 range. Simply put, Paschalakis isn't capable of making the same saves point blank that Barkas and Athanasiadis can. Both have a low 90s cap but Barkas is way too inconsistent to warrant that at the moment and paired with his other deficiencies he is not a viable keeper, meaning he gets beaten regularly when faced with real opposition. Athanasiadis is the viable version of that, despite being just as weak or weaker in other areas, his reactions to shots are both electric and effective consistently. As much as i appreciate Paschalakis for his work ethic and athleticism and consider him a viable keeper with a very high level of reflexes, i see Athanasiadis as the real deal regarding reflexes.

I wanted to make gifs last year for some of his saves but because Nova doesn't put full highlights on YouTube i couldn't, but I'll go through the library on their site and produce some links of his reactions, as soon as i can. I understand being taken aback by it as he is nowhere near as hyped as Paschalakis or others are, so i definitely want to back it up with some evidence. Then again, neither was Vlachodimos last year but our set depicted him as the best keeper in the league behind Proto

Paschalakis can very well be at 88 btw, there's actually a good chance i kept him at 87 just with what i perceive as the gap between their respective skill in mind.
Top

Some examples of 90ish resp

similar to the 2nd and 3rd, great reaction with his spare hand

considering how close the shot is and how bad his visibility is here, this is an incredible save. I wanted to get a better angle but the video is broken.. http://www.novasports.gr/podosfairo/ell ... klis-1900/

the ball loses little power here from the corner to Omo's touch, it's an impressive reaction from close range though the goal is scored
0:10 http://www.novasports.gr/web-tv/on-dema ... ia-1-3-hl/
he does a very good job here, it's a difficult hit . He generally messes up his positioning in these situations
1:12 http://www.novasports.gr/afieromata/sup ... os-1-1-hl/

is there a slight deflection here on Triantafyllopoulos and does he switch hands ? not sure
2:05 http://www.novasports.gr/afieromata/sup ... el-3-1-hl/

There is an incredible double save i couldn't find, where he leaps to cover a player that's forgotten inside the box and then makes another one handed parry. It was the characteristic save of him i had in mind

It impresses me in his responses how coordinated his hands are and in line with his fast reactions unlike other keepers who are just flailing them which i consider an indication of very high resp. I don't mind we decrease it a little if you think it's over the top though. I wanted to get a few more examples tbh .

He's got a solid style of parrying unlike Paschalakis but is less secure in his catching and clearing. Off his line he seems lost. I think Gks could drop to 76, he should be below Barkas and it's unfair to have him ahead of Paschalakis. He shows high form in the consistency of his reactions but with all the mistakes he makes i'd rather reduce it to 5 even though his Def,Gks and TW are already low.
Top
Post Reply
6 posts • Page 1 of 1