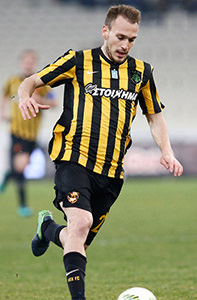 Surprisingly, he is called-up for

NT.
Is he playing really well at AEK?

Anyway, who doesn't prefer him in Vyntra's place? :p
Top

NT.
Is he playing really well at AEK?

Anyway, who doesn't prefer him in Vyntra's place? :p

He plays very good with AEK, nothing bad from him till now.
That joke with Vyntra as RB should stop sometime..

Scored a goal today outside the box. His shoots from distance are good since he played at Panetolikos. He deserves more than 63 for SA/ST.

Isn´t he playing for AEK?
Top


Thanks for reporting, that error was only appeared here. At this moment,he is the basic right-back of the team.During of the match between AEK and Club Brugge,Bakakis,according to his defensive duties,had very good reactions and i would suggest his response could be updated (75->78/79) as well as his defence,but not more than his attack (64->65/66).However, his attack awareness could be downgraded,because he didn't offer at aggressive level (attack awareness 3->2).
Top

The attacking awareness you mention is more according to Manolo's tactical approach for the European matches. Bakakis likes to get forward more but he had to be more responsible in defence this time.
was thinking about Covering special card.

I would suggest CB as secondary position.He has played in that particular position against PAOK,Panathinaikos and Milan.For this reason,the defence could be raised (64-65/66) and his defence awareness (2->3) too.
Top

I think he has improve his long passing abilities,lets see some more of him.
Top

He has improved a bit with weaker foot and with no doubt in DEF. He needs an update
Top

His abilities are still unimproved, only maybe Mentality can gain something more