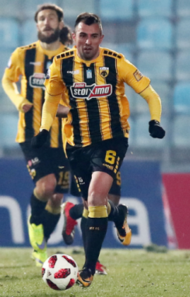 Base set is Konami, plus huge help from tzanakas3 and some of my notes. He can be even better in passing/atk/def, really an interesting prospect. Sad Matuzalem made his season over with that stupid tackle.
Top

i'd say that he's a better dribbler. apart from that, looks okay as a base. nice work guys

https://www.youtube.com/watch?v=G7o1qesevF4
Great goal. Excellent movement by Gobeljic, Ben's pass, dummy run from Pesic...
Krsticic is quite often moving into the opponent's area. With the better heading abilities, he would have scored at least 5 goals on that way. His offensive runs used to be some of our key attacking stuff in the latest European games versus CSKA, alongside with the crossing provided by Stojkovic.
Top 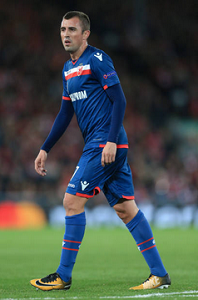 He's been playing better in the few games with Carrera as coach, showing good stamina and tenacity. He doesn't have a steady role in the team though he is essentially their only CM . He is fairly athletic and well balanced in attack and defense but beside roaming forward and pressing there isn't something he does consistently. He plays in a very individualistic way for his position. His link up game is decent but not something he prioritizes. He doesn't help in build up much and he isn't a distributor. Aside from a few exceptions based on which i can say he is an above average technical passer both short and long passing has been a surprisingly small part of his game. Mantalos has to pull a lot of the weight for him to play more the way he prefers.

His technical skills aren't as good as the set suggests. LPA and Tech are the only stats i see in yellows. His TW is the highest in the league behind Iglesias atm but he's barely looked greens in Aek.
Top
Post Reply
8 posts • Page 1 of 1