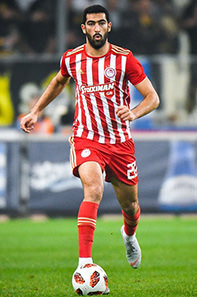 His final speed can be quite impressive, could be 80+. I'd give him 1-2 points in BB as well. I see him as a physical player though not too eager to get in physical battles like Cissé.

Good points you made. I think he is a bit more physical than this, though not too sure on 80+ TS. Might want to drop his ACC a little if this is the case. I agree with raising BB by 1-2 points, as for height yeah he looks taller from tv.
Top

Do you prefer him to Vukovic ? He makes a good all rounder but he seems a little laid back . All four of these guys are decent in their own way,, better than past years, but also leave something to be desired. It's like the defense did level up but not enough.
Top

Do you prefer him to Vukovic ? He makes a good all rounder but he seems a little laid back . All four of these guys are decent in their own way,, better than past years, but also leave something to be desired. It's like the defense did level up but not enough.

I do prefer him to Vukovic, as I generally prefer all-rounded cb's. Vukovic is too often exposed by his lack of mobility. Meriah can hold his own against fast dribblers but doesn't coordinate well with the rest. His role is actually not clearly defined. The team's signings for the back 4 have been lackluster the last 5 years or so. I believe the main thing the team is lacking is a bold character on the back. Their problem in crucial games is that once the team concedes, the defence falls apart.
They need someone to yell at them and pull their shit together. This guy needs to be at a good footballing age though (unlike Toro and Avraam)

He is.. something else at the moment

. Again a goal personally given after the ones against Tottenham and Panathinaikos. His calm and collected attitude is too easily offset by adversity. His concentration has looked very negative lately.

Don't agree with the SPS increase btw. He's on par if not a little better than Semedo in terms of accuracy but doesn't attempt to utilize any real range . I'd rather we didn't have 3 CBs with this similar pattern for SPA/SPS too. In Cisse's case it's purely power so it works with 66 SPA but here i don't really see the need for it.
Top

Yeah he's playing terribly as of late...might be due to accumulated fatigue. I read somewhere he has played more minutes than anybody else, NT callups included.

I raised his SPA/SPS after watching him in some Tunisia games on footballia. He seems to be the ball-playing CB of the pair. He would hit them hard making it difficult for the opposition to intercept. He might not attempt similar passes for Olympiacos but the ability is there.
Top