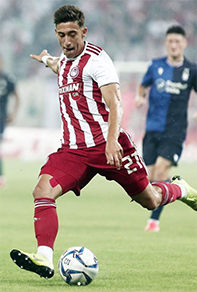 Impressed by this guy's crossing ability, and his ability to march down the Left-Wing with the ball at his feet.
He is the best I've seen from a young Greek Full-Back since Stafylidis made-it to PAOK's first-team under Bölöni. Hopefully, Tsimikas is the Left-Back to finally replace Holebas(who has been such a let-down every time he has been picked for Greece) in the National Team in the near future.
Offensive Full-Back and Early Cross Cards seem to describe his playing-style fairly well.
Also, I can understand that his Defence isn't currently one of his biggest assets as a young player, but it can surely be around the low-mid50s.
Finally, from seeing the way in which he runs, I believe that he is a TS>EP. Pretty quick at knocking the ball forward and sprint down the Wing, but I don't think that the way in which he changes direction to beat an opponent has been that good.
Top

We will wait a little for the cards,his Att-Agg and LPA-LPS convey his style well enough for now.

petreleo wrote:Also, I can understand that his Defence isn't currently one of his biggest assets as a young player, but it can surely be around the low-mid50s.

He really seems quite weak in that aspect,he fouls all the time in his defensive efforts.

petreleo wrote:Finally, from seeing the way in which he runs, I believe that he is a TS>EP. Pretty quick at knocking the ball forward and sprint down the Wing, but I don't think that the way in which he changes direction to beat an opponent has been that good.

Yes exp and TS should have a better gap between them,although good Exp is a trait of his,you can see that when he gets tightly marked and tries to hold on to the ball .
Top

Amazing performance yesterday. He attacked the left wing relentlessly and effectively, transitioning to a WF frequently.

his corner for the first goal

Also he looked to jell well with Podense, playing very well off his back and combining for 1-2s

here he did great to reenter the fray after his initial effort, lead to the second goal

It's been a nice surprise to see how he managed to progress while he was away. While the attributes that set him apart as a real attacking fullback prospect have been honed further the biggest improvements he's made are in his condition and defense which were his biggest weaknesses before. At the moment he has one of the best work-rates in the team, he's also the fastest player i think.

As far as stats go, Def, Resp, TW need the biggest increases. Comparing him to Koutris, they are both responsive and kind of sloppy going 1-1 with opponents but i think Tsimikas is better in tackling and winning battles cleanly, also being weaker physically. TW would be the biggest gap between them. Tsimikas looks decent at covering space, doesn't leave many holes to be exploited defensively and works well with the player ahead of him.

His DA can go a little lower, he's a speed dribbler basically so he doesn't really need green. Tech looks just shy of 80, surprisingly clean touches up to now. Also he isn't really crossing, he's playing the position by running up his flank and interacting with his winger. The ones he's made haven't been as good as i'd expect, considering that seemed like one of his biggest strengths early on.

Consistency is still a bit of an issue with him. He hasn't had the same impact every game but he has been positive every time. He's shown a high tier fullback's attacking flare and Stamina but in other games he's played closer to a good standard of support but with nothing particularly creative or innovative in his offense.

Well said, I was going to comment how better he looks defensively compared to Koutris. Tsimikas can cover and can "bite" the ball off the opponent, something Koutris cannot do. So far I would pick Tsimikas over Koutris any day. It remains to be seen how Masouras would fare on the right in place of Omar.

Agree with all your suggestions but I have a small objection in LPA/LPS, he made a good cross in late game yesterday while being stationary and generally he's shown some good glimpses. Perhaps he might lack a bit in the accuracy department yeah, but the power is there.
Top

bitz wrote: Tsimikas can cover and can "bite" the ball off the opponent, something Koutris cannot do.

There's a great example of this against Burnley away i'd like to share but i can't find the clip.
This is after half a game of Olympiakos getting pounded: he gets dispossessed just outside the penalty area and the Burnley player gets inside gaining a meter on him, no other defender can react quickly enough so it's do or die. So at that half second i expect Tsimikas to be frozen because of his mistake and that there's a really good goal chance incoming. When time starts flowing again though he instantly takes off, comes from behind and assertively pries the ball from him cleanly. And all these Burnley attackers were like oxen. I'd definitely like to see it again but this is as best i can recall it. It was really impressive in terms of defensive skill and also maturity and presence of mind.

Tsimi has learned to play fullback properly whereas Koutris hasn't truly transitioned to it from being a winger yet.

bitz wrote:Agree with all your suggestions but I have a small objection in LPA/LPS, he made a good cross in late game yesterday while being stationary and generally he's shown some good glimpses. Perhaps he might lack a bit in the accuracy department yeah, but the power is there.

Yeah no problem, an adjustment may be needed instead of a downgrade. I'm fine with an 78-78, or do you think he should get an extra point in LPS ?
Top

Yesterday can be seen as indicative of where he is atm defensively. He was attentive and overzealous but careless and was eventually sent off for it. At the same time he made this save you wouldn't expect from him, showing both skill and tenacity.

57 is fair at the moment but he shows signs he can reach 60s down the line.
Top

He's made strides as a defender, consistently successful in 1v1s , hounding his adversary and doesn't leave holes to be exploited. Great match up for Visca and Wanderson in recent games, who performed the best for their teams. He has earned a 60+ value for me easily. Interestingly he might be the best in that aspect we've seen on that side for a long time since Olympiakos' left backs have traditionally been below par defenders, from Holebas to Masuaku to Koutris. It's refreshing. His return and Semedo's arrival have been instrumental to the team's 5 clean sheets thus far.

Tech can go to 74-75. I based his current number on what he showed at the start of last year before he was benched and it looks high now with a better perspective. SPA/SPS can drop a bit too. Keeping up with last year he advances less and sticks closer to the half line, emulating Martins' more efficient approach to the role. Still very solid at winning himself some space with his explosiveness when makes a run.

Also made good attempts to whip the ball into the box.

Yep, he's a 60's DEF player in my book as well, let's see how he performs in the long term as a starter, now that Koutris is on his way out. The team doesn't have another LB at the moment...
Top

Another great game and another display of his crossing ability.

Two crucial defenses he pulled off against Pao, he showed a soldier's mentality throughout the game. Also finally got his assist with Guerrero's goal !

+ another good cross for El Arabi's goal vs Bayern

I think we need to look at his DA/TEC closer for the remaining of the season. He has a handful of successful dribbling attempts the last couple of games to make space for himself to go for a cross or a shot.
Top

His decisive run that lead to Olympiakos' goal. He was also excellent defending against both Arsenal and Paok.
Top

His decisive run that lead to Olympiakos' goal. He was also excellent defending against both Arsenal and Paok.

His ability to bite the ball off the opponent makes me think he should be rated above Omar in defense. Perhaps their values should be swapped. And I feel vindicated that his DA is starting to be unknowledged. He doesn't use tricks but can maneuver effectively and sent the opponent the wrong way. A little higher AGI wouldn't hurt either.
Top

A yellow mentality player in the making, if he isn't one already. His resolve is incredible.
Top
Post Reply
16 posts • Page 1 of 1