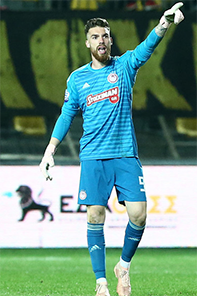 He could get a good update in DEF (+2), GKS (+3) and RES (+2).
He's been a key player in Portugal's under-21 and always performed well in the club.
It's strange that he doesn't play more often in Marítimo.
Top

He stopped it all yesterday. Pretty impressive performance.

He looks good, very nice reflexes and confident when he steps out of his goalposts.
Top

He held his own in the recent set of difficult games, showcasing his reflexes, strong hands and ability to close down on his opponent effectively. The 1st and 4th are especially impressive.

his bad handling that led to Aek's goal the only that took away from his high level of performance
https://gifs.com/gif/21-4-1-NLxyGv

Highlight saves from the games against Plzeň and Basaksehir. He is brilliant atm .

Turns out to be a gem of a keeper. Dunno if it is fair to compare him with Roberto Jimenez (Roberto had a worse defence in front of him). Hope he stays injury-free and maintains this level of performances throughout the year.
Top

He had a terrific performance against Bayern, simply amazing. And at one point it was frustratating for Bayern to beat José Sá, they worked really hard to score!

Akephalos wrote:He had a terrific performance against Bayern, simply amazing. And at one point it was frustratating for Bayern to beat José Sá, they worked really hard to score!

Safe as usual. Didn't have the one spectacular save though i'd set apart these two clearances on Coman's close range shots .

Now, the team's performance was sad. The game should have finished with a much higher score for Bayern. Beside Sa the CBs and Omar defended fairly well, other than there was nothing redeeming for Olympiakos' side.

Indeed, he is very confident. He has mentioned he always does his homework on the opposition penalty takers. He is a candidate for Penalty Stopper but i think we just need a little bigger sample.
Top
Post Reply
11 posts • Page 1 of 1