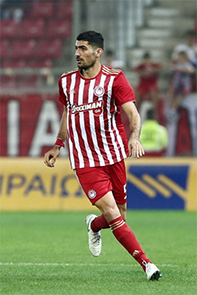 Why is he given the armband ?why is he even still in the team,he's been either injured or terrible for years now..
Top

Two fantastic goals on his debut

He has been the one anchoring lower while Camara's moving all over the midfield. His touches are quite smooth and his short passing is ok, doesn't seem to use speed on the ball atm and plays simple. Looks fitter than he did in the past.

He had a good game providing cover against Aris and run the most i have seen him. He looked like a viable pivot, rather than just a good foil to Camara .
Top

that great goal against Atromitos

This season Martins showed a preference for technical players with a more specific role on the pitch over a great work-rate where those two options were available. Perhaps seeing it as a way to minimize risk at these positions and increase efficiency through their more limited function. We saw this in his insistence with Koutris over Tsimikas , Hassan over Guerrero and also Bouchalakis taking the mantle of cerebral DM Guilherme's partner for a good number of games in the second half of the season over a wonderful Kamara .

I can't say i agreed with the other two choices most of the time but i think Bouchalakis performed very well these past few months and was even a standout at a few games. Though Olympiakos was expected to dominate possession in most of these games so starting a creative midfielder made sense, these performances were the result of the gradual improvement he's made since the beginning of the season. He wasn't just a more suited attacking CM, his Stamina is a lot better, his supportive game improved, his concentration is very good where in his last stint with the club he was lazy as hell. Even his passing has improved in range. He is not a good defender still but he plays this new DM/CM hybrid role very well positionally, so he generally doesn't leave holes to be exploited by the opposition.

Leaving Kamara out, the team will always lose immensely in coverage and quickness in transition. That Bouchalakis counteracted that loss to some extend with how limited he is in many aspects is impressive. I believe he's become a reliable player to rotate either Camara or Guilherme and with something of his own to give. If the team buys a midfielder in the summer i think it should be a responsive player that covers ground, also with a strong physical game as that is another thing missing when Kamara isn't on.
Top

http://www.gazzetta.gr/football/champio ... -o-martins
Very good article by Samprakos on him and his performance vs Tottenham (in Greek)


Another game he did 11Km or so, steadily up there. Amazing what physical shape he's in compared to a few years ago . Should he be on IT B ? I don't remember if he injured at all last season.
Top

He had a great game today. He distributed, created and covered so much ground and defended to his best ability. Seemingly in a constant improving phase atm and possibly the player of the team to watch.

Don't know why Martins didn't give him Guillherme as a partner given that their chemistry is the backbone of the team, similarly with Podense and Valbuena who were rotated too. The team's chemistry that's been the reason for it's success up to now was sacrificed for a rest day (?) in a Champion's League game

I know for a fact that Pedro Martins is a fan of him, but I find him too passive/static for my liking, especially when the team is defending. Camara is very dynamic but reckless; Guilherme is somewhere in the middle without any major weaknesses. Thinking about it, in theory they complement each other well! In terms of passing, Bouchalakis has the edge over the other two but he is still far from being considered a competent passer, simply because he has the vision to pick a pass but his execution is lacking.
Top

I was just about to post, his short has noticeably improved. Look at how sharp some of these are ( some more in conception and some more in execution ). I think i might be looking at him from where he was or in the context in the team a bit too much rather then an individual player. Still i'm siding with Martins on this one

Good job on the gifs, I can recall some of those passes myself, I suppose these are enough to bump to 80 SPA for the time being!
Top

bitz wrote:Good job on the gifs, I can recall some of those passes myself, I suppose these are enough to bump to 80 SPA for the time being!

thanks, pretty sure i personally generate a good chunk of their traffic at his point

I'll keep it just shy for now, just because his long passing has been his better passing skill for years and these are all very recent. Though LPA could deservedly go to 81 just as easily and keep the point distance. These are yellow SPA material indeed.
Top