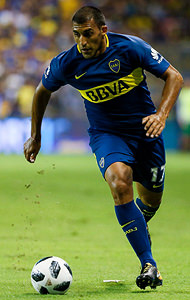 i reduced his att (i think ould be slightly worse, he is around 79 looking ladders) also much lower agility, acc and ds and it:c
Top

Another injurie, 7-8 in Boca so far, it seems really fragile lately. IT C for sure.
Top

And what about giving lower values in sta/ment to make him less dominant in matches, I watch him very far from that level of intensity than when he was in Huracan.
Top

He is very static and is almost always inside the box, it does not help in the pressure to the rival cb's. His cond/fit is disastrous, and his touch is almost amateur, Facundo Parra style.
So: sta: 73, ment: 77, tech: 68-70, cond: 3?
Señores yo soy del Gallinero
Top

I do think he can quietly sit at 80 in attack, the previous value, even more thinking and watching the ladders, 78 is way too low for this guy who is one of the few old style scorers we have in Argentina.

Well konami rate quite odd some values in some sets, some young players has 77 in att awareness and thats quite strange because clearlty he doesnt deserve such a value.

Back to Abila there is a big difference between him and others players i talk a bit on discord about him but i feel he is a little worse in att than some players as Maxi Rodriguez, pulguita, Matias Suarez but is true he should have two or three steps in front of Matos, Salom, Gata Fernandez and Acosta but probably they deserves less than 78 in att.

Regarding his att value i said before he ius around 79ish i dont have any problem if is 79 or 80 is just cosmethic thing
btw his stamina could be even worse, isnt?
Top

Acrobatic volley goals are back