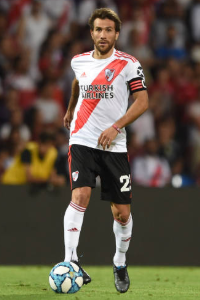 move to Zaragoza
I want my son Brooklyn to be christianized, but I still don't know in which religion - David Beckham
Top

is it confirmed?
I'm against you
Top

These need some serious changes

Firstly, he's so much more agile than the currently Agility stat conveys. He's sprightly and turns incredibly sharply, an asset of his that seems so much more akin to a winger. Heck, in the recent Zaragoza vs Getafe game he made a 360 degree turn to keep possession of the ball and turned so sharply that it seemed similar to someone like Gio Dos Santos. He certainly isn't a 77 and his Agility should be in the 84-86 range.

His first touch, whilst not outlandish and fantastic, is surprisingly good and he can control the ball well with one simple touch; bringing it under his control with relative ease. Whilst he certainly doesn't warrant an incredibly high value for his Technique, his first touch looks good enough to sit at an 80 value.

What truely stands out, however, is his vision and his long passing. He has impressed greatly this season with his superb passes from the deep that are both accurate, with the passes aimed for the chest and feet, and weighted well. Yet he also understands his colleagues well, and that's equally impressive when you consider that he's only a recent signing for the club. In recent weeks he's looked more reminiscent of Poulsen during his Sevilla period and yet the current stats aren't that indicative of this. I'd say that you could boost his Team Work to an 83-84, his LPS to an 82-83, and discuss a potential increase in his LPA (He has, after all, still made a few duff passes).

He certainly hasn't looked like he warrants the Sliding star. If anything his ability to hold up the ball in order to make a solid pass has made him look more warranting of the TD star (although I certainly wouldn't give it to him).

And I haven't been impressed with the power of his shots. They've looked rather slow and weak - on the weekend alone he made a plethora of shots that gave Ustari an easy time - he's looked a lot closer to a high 70 than a mid 80. Methinks some discussion needs to commence. On the other hand, his clearances have looked powerful at times.

His Dribble Accuracy is definitely better than this. Whilst his holding up of the ball means that he requires a minimal amount of control and little speed, his control has definitely been better than the current 74. At the moment I'd opt for a value within the 77-79 range. And I'd go perhaps 1 point higher in his Dribble Speed

I'd also knock his Balance up 2 points, whilst he's been the loser in quite a few physical battles he has put up more of a staunch fight than the current value implies. He's certainly not as bad as Luka Modric or Michael Johnson in this department

I'm also unsure of his current FKA/Curling values, his form this season has suggested that the values should be swapped in these departments.

Oh yeah, and I'd probably give him an 81 for his Short Pass Speed

RES, SPA, LPS, FKA, CURL, MEN and I'm not sure now if SA or ST or both, deserve change.
Top

What are your thoughts buddy?

RES, MEN and LPS could rise a bit and SPA, FKA and CUR go to down.
I have not thought the exact numbers yet, but I'm sure it should be changed.
Top

Yeah I was also thinking about a mentality raise. Haven't honestly played much attention to Ponzio lately but at least that's something he could use.

Updated and given tweaks

i listen he dissociates (desvinculo) of zaragoza to go to river
THANKS FOR EVERYTHING, THERE WILL BE NOT ANOTHER LIKE YOU

xeneize wrote:i listen he dissociates (desvinculo) of zaragoza to go to river

and accoding to what i listened, he's going to be the DM of the team

give him time
THANKS FOR EVERYTHING, THERE WILL BE NOT ANOTHER LIKE YOU