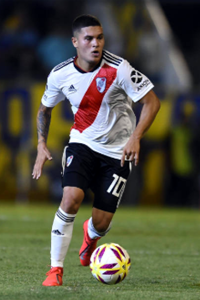 He's quite slower than this. Never looked like a player with TS in greens at all. More like TS 70 ACC 77. DS could also be lower than 80 even with TS 70, like DS 78. And his Form is clearly a 3 or even a 2; he's fairly talented but he rarely seems to play nearly as close to his full potential.
"Willy Wanda is Chinese!!!"
Top

He played good matches in CL 2017, I agree with decrease speed stats but not that drastically, especially ACC. TS could be 72 and I´m ok with DS 78 but I´d prefer to wait to see him in Copa Sudamericana, last games with Viola made a great attack partnership.
Top

He still keeps his amazing ability to make passes from everywhere, Gallardo should start putting him in the starting 11, we do not have a playmaker with those skills, yesterday he created two very clear goal chances.
I guess he have to get physically better, if he wants to play the 90 minutes of an AFA match, but the talent is there.

I don't know if it's a fair comparision, but everyday I compare his passing to Verón's. I mean, the way he uses it, the pace, the way of use his foot to get accuracy in long ones, the variety. Of course, he isn't that good but I find both really similar stylewise. He showed more pace in this match at his passing than every minute I remember in the past, he was quite soft, pace was not a factor back then.

And yeah he's not ready to play 90' in AFA, that's clear, he's probably 4 kg? overweight and with the rythm of matches in here, he'll be easily done after 45-50 minutes I guess, or at least neutralized. He's very slow, I don't think he's showing more than a 70, more or less...yeah he still has pace on the ball, I mean his pace cause he's easily caught by defenders when he runs more than 10 metres.

In the video he looks like a RCMF, he should be more aggressive and he'll be great imho...he lacks defensive awareness to play like Verón (going with the same example) and he lacks finishing and consistency at the last quarter of the field to be a real AMF...it's weird though and probably the reason why he can't make it to be great overall, at least until now. I guess Gallardo will turn him in a great playmaker, but for sure he's waiting Quintero to correct his physique, otherwise he won't use him as much as he'd want.

This pass was awesome imo

lol at his physical condition, he is obviously no close to what he needs to play here in afa but at the same time he is an excellent short passer, damn! Every time when he plays does at least three or four crazy assists, yeah he plays really deep to be the amf and doesnt any kind of defensive ability, so the team isnt compensate with him as cmf.
Also i would to remark that he doesnt spend any energy on and off the ball, his ts is hardly in 70 and his ds could be drastically go down 4 or 5 points, he uses more his agility and great ball retention to avoid players in slow and step movements.
Top

This pass was absolutely brilliant, vision, accuracy, technique, speed and timing and ended in goal:

And also a totally different kind of pass but very nice as well:

And about his off the ball movement and his speed I have really doubts about it...look the whole vs?

He moves quite a lot for what you expect from him...eventhough he's playing 30-40 minutes his amount of off the ball movement is quite good and his final sprint isn't that bad? Really hard to rate cause he fluctuates a lot on his speed.

yeah DA and are hi best assets, I agree with 85 in both, even if his fitness is shit

That dribbling "star" could be switched for T. dribbling
Top

Do you guys could provide some 85ish examples of da/tech? Tbh I'm not impressed at all about them and current numbers seems fine.
Top

Dman, he is fucking genius, his passing ability is blowminding, is just a delight to watching him putting those balls between the defedners and midfielders, he has a great eye and does a good amount of variety passes. Yeah pretty sure that his passing ability is his best assets.
The other day vs Colon entered in the second half and change the course of the game, was almost impossible to stop him, did at least 6 or 7 assits but the strikers had a bad night and they couldnt score.
The set is pretty spot on from what i could watch of him, he can add some great football in this team.
Top

hmmm i never see a 40 on deffense for he, never dense never never, a 35 is best for he, simply the defense dont is part of their game, and the short mas i sometimes see on a 87-88 is really amazing and the LPS is someting like low oranges, he does a incredible pass is a master in all games he demostrates,
Top

What a genius, Recoba's style. His shoting is just world class.
Top

Vickingo wrote:Do you guys could provide some 85ish examples of da/tech? Tbh I'm not impressed at all about them and current numbers seems fine.

I'm starting to watch some kind of great ball retention and the way he hides the ball on his foot when he comes from the side to the center looking for a killer pass, but still I think it's not a real factor in his style.

And his overall shoting is so great and most important: consistent. His curling is just abusive, can see it some points higher, I want to represent how incredible foot this guy has.

He's not tactically good and his fitness keeps being quite poor (even when it's evident he worked his ass off after WC and he gained some good mass muscle and he's a little thiner), he plays where he wants, he has no defence awareness and he's disorganizated...he has no real position in the team but that helps him to be everywhere and provide good football to the team.
Top
Post Reply
99 posts