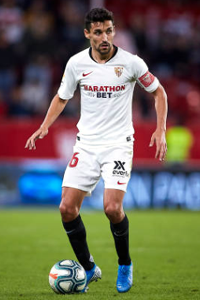 yeah, it's the age old problem with pes, you can't really make players limited like they are in reality and still give them stats that represent them. I mean... you could give him white DA and hes still gonna beat people left and right with his speed on and off the ball.
Top

i dont see him anymore in yellow areas of attack. he is a middle green attack SMF with high aggression for me, thats all.
Top

think his DEF is much better than 42.
Top

this guy.... my god what was he ever doing in city? I think the only reason he plays is because he has some sort of relationship with pelegrini, and I don't mean sexual or anything crude, hes just a player he likes and plays at the expense of the team.

Don't get me wrong, hes a good player, great at what he does, but he makes no sense in city. How can you put such a limited player in a free flowing attack? It's senseless really, there are a countless wingers who are more fitted to city than him.
Top

Anyone agree with white att? He's so bad and limited, harmless.

In Sevilla, he was one of the best assistants, but he was properly used. Sevilla was well known for playing with quite tall strikers with good aeiral abilities. Through the years, he used to play with Kanoute, Luis Fabiano, Negredo, and he was there to constantly pump the ball into the box to find them.

In Man City, he's so fucking pointless, he always was especially after Negredo's and Dzeko's moves to other clubs. He had some assists to Negredo in Alvaros first season, but in this system and previously Pellegrini's with only Aguero upfront, nope. He can only play on the right, he can't dribble past anyone.....

Att easily can go down to 74. Lpa, even though he really was a good crosser, he also had like a million crosser per game in Sevilla's system back then, giving him a lot of chances to assist, so i doubt he deserves 88. In City he never confirmed that value. Also can get a solid downgrade there. To be fair i agree with one of previous comments bout his DEF. Hes much much better than 42.
Top

Don't quite know where my post went, anyway I have hacked the set, though I've not touched his speed stats, though I argue they also need hacking down
Top

I don't know what you've done to his technical stats, hes shit because he can't play football inspite the fact that hes far above average technically, hes got half a dozen assits every season since joining city for a reason (except this year), sta too
Top

about stats the only thing i find wrong is agility,to me hes not worth of an orange value,he struggles a lot to make a turn or maybe its due to the constant use of his right foot because he uses his left just to walk ( could be a wff thing)
!!!CHUPETE LA CONCHA DE TU HERMANA!! , !!VAMOS CARAJO TE QUIERO VER!! , !! TE QUIERO VER PAPÁ!!
Top

I just don't see him being above average technically in all honesty, nor have I seen evidence hes worthy of such high STA,
Top

Too unfair this "update", their shares have been decent and their ability to pass and assistance has been effective
It has not been dissonant as RB, it has been decent and tidy.
Also this season he has played 972 minutes, equivalent to 10 games
What a good criterion eh!
"No soy el mejor del mundo, pero creo que no hay nadie mejor que yo"
Jose Mourinho
Top

For a total of more than 40 matches played by Man City this season (Premier League + League Cup + FA Cup + UEFA Champions League), 972 minutes altogether for a "high profile" player is a crappy amount.

And, for what he's shown in the last 3 seasons, the overall update was even kinda generous in a few aspects (like RES and Technique).

So... If I was you, I would be "pleased" that this overall set wasn't nerfed down so heavily.
"Willy Wanda is Chinese!!!"
Top

Fucked it I've reverted it, lets start again, obviously made it clear how I see it going
Top

His Sevilla deal is really confusing. They brought him to the team just for being a Sevilla legend, but the thing with him is that he can work in only one system, with tall striker and heading capable players geting in the box upfront, with him included with crosses a lot.

Apart from having a good delivery from the right, and being a good presser but that's off the ball , he's pretty much useless on the ball. He's playing on the side of his stronger foot, which also can affect a RB overlaping in a negative way, his shooting is below average, and he cannot even a create space for shooting for himself, he cannot cut in cause he's on his weak foot.

Okay, it was fine when the likes of Kanoute, Negredo, Luis Fabiano were at Sevilla. It was a brilliant mix, a good crosser with good stamina, sometime 2 more than capable players in terms of heading the ball in the box, he was many times one of the best assistants in Europe.

But now? Strikers for Sevilla are Muriel and Ben Yedder. Muriel is a really good striker, not the one who'd lead the line in my team, but has a really good dribble speed, very good control and if you give him enough space he'll kill you. Ben Yedder is an amazing poacher, who works really good with dummy runner, has a clinical finishing, good movement. But they are small and not good in the air. The option of Navas' long crosses is automatically gone, and if you took him one of his very few qualities, he's more pointless than anything.
Relja's not dead
Top

I absolutely agree with everything you've said, it's one of the reasons players like Diego Capel seemed decent...same reason as Navas. Difference is Capel left Sevilla much earlier and exposed all his flaws to the world sooner. Both are good one dymensional players, and with the likes of the strikers you mentioned they are surely a threat because they are a great complement, but now? What's left of Navas really? Like he's clearly a player who could shine in a small team or be a great addition to a certain tactic in a big one, but having him in Sevilla for no reason at all is a waste, for him and for them (play-wise),

Navas's set does a very good job of painting an accurate picture of his characteristics. The only issue i have with it is it doesn't highlight his best abilities to the right degree. LPA like Jurgens suggested is of a higher tier. He looks like an easy 88, it's not so much that he tries or makes incredibly accurate crosses, it's more so when he finds himself at a good position you can count on him to deliver a perfect ball, an assist to be converted. The other thing is his DS, i consider him to be one of the best speed dribblers in the world. The effortlessness with which he combines top tier speed, acceleration and close control is mostly unmatched. He is 33 but he's still by far the fastest player on the team and the most formidable on the ball. He shouldn't be below 89 for certain and that's just because he he's not constantly on the move, 90 is perfectly deserved though. For a comparison of his movement, his level of covering his side as a WB is below that of Escudero or Vidal. His role is different, he inserts himself into play close to the final third individually to far greater results by using his dribbling or providing final balls. Only other thing i'd mention is that he could do with a small raise in Def. Average by all mean as a defender, he just is as attentive as he needs to. That said, he is at a viable level of averageness, unlike Aleix Vidal ( currently rated at 60 Def ) who looks a complete novice by comparison, like a winger out of position, Navas looks at least natural defending. I see him at around 55 while Vidal at low 50s, though i have admittedly seen little of the latter. Overall, he has a fine niche for himself as a WB at this level, with a more lax need for him to be intelligent or inventive upfront or a good side back in term of defending, and his technical ability and speed shine much more brightly than they would in a far more physically oriented league like the Prem.

* I'll post this here as well, you can tell me what you think when you can Fixer. I was getting pissed off lately about how few reports on players are popping up in the forum and how noone aside a few notable exceptions bothers with them atm.

** Btw Footballia hasn't posted league games 10 and 11 of Sevilla. I don't know weather they post systematically or not and if they will put them up at some point. But if someone knows somewhere i'd able to watch the games vs Huesca and Sociedad give me a pm, i'd appreciate it a lot .
Top

He played very good game vs Atletico, arguably the most dangerous player of the team going forward. Although, he hasn't had that same presence throughout the season, there are certainly games he's ghosted.

Only note i have is regarding speed i'd rate him a little lower, now also having seen more of Aleix Vidal and Promes who are his most notable comparisons.
The striking thing about Navas speed wise is his burst and quickness in his movements where he beats Vidal by a margin but in terms of final speed he is a few point below him at the moment. I have him at TS 88 Acc 91 DS 89
Top

He's a beast, best RB in the league
Top

Endless running and crossing. Can't believe how little he suffers compared to what you'd expect. He's always performing superbly and has been for years as a SB.

Needs offensive fullback card/playing style, also his ball winning is around 67 imo and form up to 5~6.
Top
Post Reply
165 posts