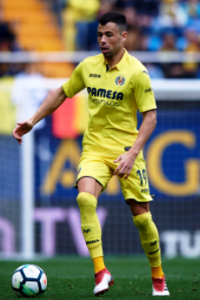 Is imminent by now mate. No official confirmation on Rayo's web yet

Imo we could remove Playmaking. He looked more creative at Sporting but now I dont see he so much. He's more into the dirty job, not to mention talisman.

Yup, *Playmaking and Talisman should be deleted, with Enforcer added instead. Needs also a slight raise in Response and some tweaks to the ATT/DEF ratio.

Mentality to 85, he's capitain because of his experiencie in unpaids...
Rayo Vallekano
Top

But I could see some higher ment despite that anyway.

btw, I think his Free Kick Accuracy and Curling could be increased , to a 81/81 respectively.
Top

This guy's case is really fascinating. He's one of those 'underdogs' players who rarelly gets attention, even among his own team (Michu, Tito, Casado or Diego Costa have just stolen the show this season). But he provides the team with a certain kind of balance and good game vision in midfield... that just dissapears when he's not around. I mean, Rayo had a magnificent run in january and february (it even looked like they could get an european spot), then Javi Fuego got injured. He missed seven matches, and they lost the seven matches. You could see how important he's been for them precisely when he's not been on the field. If I'm not mistaken his contract just expires this summer, and no wonder why several teams will try to sign him for next season.

So, regarding his current set. I think he needs quite an upgrade, mainly in DEF and Teamwork. I see him well on greens for DEF, and maybe a bit higher on ATT too (not greens but almost). Regarding Teamwork, easily a mid yellow (84, 85 maybe). And Mentality could use a raise too, deserves to be over 80 IMO.

On the other hand, he's not this fast nor agile.

Regarding stars and cards, no need for Middle Shooting nor Long Ranger. Also have doubts about Playmaking... but maybe we could leave Talisman in. Enforcer and Covering should be added too.

Fine to me, but if you leave talisman, you should keep *Playmaking.

This man is a really good DMF. I'm updating to green DEF and 85 TW if nobody disagrees. Also a bit higher BAL, not the strongest guy on earth but knows to use his body for sure.

I'd go for a bit higher than minimum def, the guy Is a pretty good tackler and somehow manages to be wherever any ball may be. He used to be a playmaker, but I really think that he's on his best on a Xabi Alonso style role, with higher focus on defensive duties.

Agree with DEF increase. Performed 12 tackles against Madrid and was very solid.
Every man takes the limits of his own field of vision for the limits of the world
Top

Does his move to Valencia is official?
Top

Nothing on Valencia's or Rayo's official webpages yet.

so why he's in Valencia forum already?

I moved many players according to MARCA's transfer list, which they have always updated when official sources came out and he appears there. Not sure if that was a mistake from them or they just rushed a bit. Moving him back to Rayo.

78 jump misses many times when jump with ohers players

for other side deserv more tenacity ,one more point 79
Top
Post Reply
25 posts