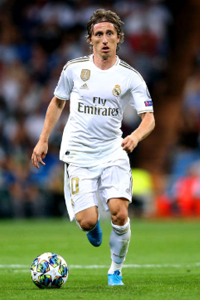 why no middleshooting or long ranger?

Yeah! Why not? 1 attempt / 1 goal in 35 matches, wonderful stadistics to deserve such card

yesterday was decisive in the game, but put middleshooting or long ranger, is exaggerated, I liked his dribbling and made ​​good passes, I agree with Jurgens, about his SPA / LPA
maybe DA in 88/89 imo
"No soy el mejor del mundo, pero creo que no hay nadie mejor que yo"
Jose Mourinho
Top

hes a very effective dribbler for sure , but i just dont have the feeling that he keeps the ball as close as a near orange value suggests , ive always been admirative in watching him get past opponents using his close control , he is probably that kind of players that are able to maintain a great control on the ball even if its not really close to their feets , thats why its quite delicate to put him higher than what he has right now imho.

What a amazing goal!

The parable of this world is like your shadow - if you stop, it stands still, and if you chase it, it distances itself from you.
Top

No way he's worse than Özil in terms of SA.

His SPS is better than this, it should actually be higher than LPS. He has a peculiar style of passing, he likes to use the outside of the boot a lot... sometimes gets too enthusiastic but he's pretty effective most of the time. I'd have SPS at 85-86, nothing lower.

Stamina so high doesn't convince me though... he's really supportive and energetic, but seems to run out of energy halfway second halves. He was really really good today until min. 60 or so, then he dissapeared completely.

Where would you put him? He was crazy with Tottenham Hotspur, and your example gives a Low yellow-like impression. I personally wouldn't go below a 3-point reduction.

Well I'm hesitant to put my bet on a concrete value. Important question would be... how many times has he been given the chance to be the main playmaker, the player with the role of dictating the play of the team, for a whole match? Two, three maybe? And those few times... well, he hasn't looked like an orange stamina at all, he's energetic and supportive as I said earlier, but clearly gets tired in second halves. If you compare him to Alonso... Alonso is not that supportive (yesterday, in the first half, Modric was everywhere) and not that energetic as well, although Xabi doesn't really need it. But then again Alonso manages his stamina really well, he does a good share of defensive work and it's rare to see him really tired. Modric on the other hand... minute 60-65 or so and he's worn out, but before that he was everywhere like I said, so it's difficult to say.

I agree he shouldn't be brought down further than mid/high yellows, it's just that oranges looks like too much.

Oh and his TW is oranges no matter how you look at it. I think I had talked with jurgens in the chat about it, 90 was the lowest we had considered, even if it's a cosmetic change, I'd go with it.

Yesterday he indeed was everywhere. Was doing his job and Xabi Alonso's who wasnt in great form both matches against Dortmund. Isn't his RES a bit harsh? I believe it should be yellows.
Sporting Clube de Portugal meu amor / Working on new sets and updating Liga Sagres
Top

I don't think he had a really good performance yesterday. Some good moves here and there but nothing special. Considering Alonso was heavily marked and pressured (key of Borussia's tactics in both matches) Modric had 180 minutes to show his skills and overall he was dissapointing in the sum of the two legs.

I don't agree at all. Maybe it was Dortmunds tactics but Xabi simply didn't play good. Terrible for a player of his quality exually. And on the other hand Modric was in some parts of the 2nd game bossing the midfield. Both offensive as defensive. But that was my point of view.
Sporting Clube de Portugal meu amor / Working on new sets and updating Liga Sagres
Top

Strange, I don't remember any 'class' moves from him. I think he did an o.k. job, much better than at Dortmund, but nothing special, I'd expect way better from him honestly.

Well he intercepted quite a few balls. 2nd balls where also for him (i dont know if you call it that way in English, but its like loose balls). He was very responsive against Dortmund. He kept Madrid going forward with his recoveries and quick thinking, always trying to play the ball forward. He was just extremely motivated. Dortmund couldn't react on the midfield because of Luka (in some parts of the game, not all ofcourse). His passing wasn't that special, but he didn't make any mistakes either as far as i can remember, so it becomes pretty special

if your playing that good already. A lot of those smart moves by Modric always playing the ball forward:

Is he a better long passer than Nuri Sahin? The guy I remember from Tottenham and the Sahin I see in those "vs" videos have quite a difference, in Sahin's favor.
CLICK ON SHOW TO SEE THE VIDEOS!
If you have old matches of Cassano, help me out.Post in this thread! http://pesstatsdatabase.com/viewtopic.php?f=140&t=27218
Top

cartman_jmc wrote:Is he a better long passer than Nuri Sahin? The guy I remember from Tottenham and the Sahin I see in those "vs" videos have quite a difference, in Sahin's favor.

Well, it's been 14 months since Modrić left Tottenham, you could watch some matches in his new club now.
Top

I was asking if he has improved that much or if we are underrating Sahin.
CLICK ON SHOW TO SEE THE VIDEOS!
If you have old matches of Cassano, help me out.Post in this thread! http://pesstatsdatabase.com/viewtopic.php?f=140&t=27218
Top
Post Reply
373 posts